Naseeruddin Shah: There'll Be no Second Part of My Memoir 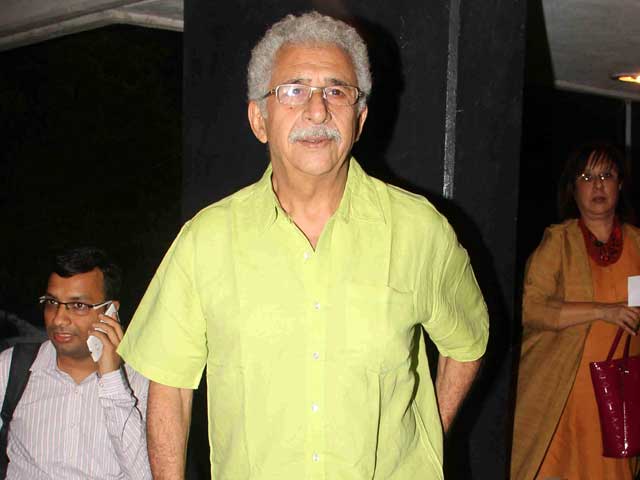 The book narrates the story of his struggle to earn a living through acting, his experiments with the craft, his love affairs, his early marriage, his successes and failures in a candid manner

Veteran actor Naseeruddin Shah, who has chronicled his journey in And Then One Day - A Memoir, says the book is a mirror reflection of his life and that he has no plans to come out with a second part of the publication.

"My book talks about my entire journey from getting into theatre to struggles, hardships, love, family, and friends. I think I would not be writing a second part of the book as this includes everything of my life," the 64-year-actor, who has been part of filmdom for almost four decades, said at the launch on Wednesday.

The book was launched by director Shyam Benegal in the presence of the seasoned actor. The event was held by Literature Live! Evenings and Penguin India in association with National Centre for the Performing Arts (NCPA ) at its Experimental Theatre.

Columnist Anil Dharker was also present at the launch.

Naseeruddin Shah has carved a name for himself in theatre, acting and direction.

A National School of Drama alumnus, he has been lauded for his powerful performances in acclaimed films like Nishant, Aakrosh, Sparsh, Jaane Bhi Do Yaaro and Masoom.

He has featured in his share of commercial cinema with projects like Hero Hiralal, Tridev, Vishwatma and Sarfarosh. In the recent past, he has been part of entertainers like The Dirty Picture, Ishqiya and Finding Fanny.

Naseeruddin's memoir not only accounts his life, but presents his story in a tongue-in-cheek manner.

"I made my dear ones read the book and my wife (actress Ratna Pathak) found it really hilarious and entertaining," the actor said.

The book narrates the story of his struggle to earn a living through acting, his experiments with the craft, his love affairs, his early marriage, his successes and failures in a candid manner.