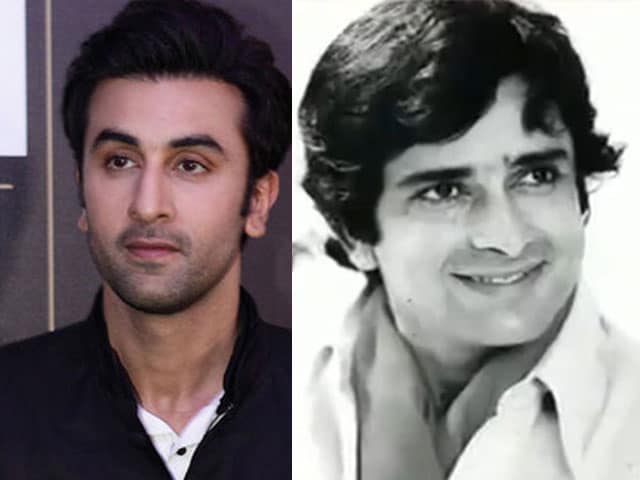 Ranbir introduced him as 'a junoon' and 'an icon'

Bollywood actor Ranbir Kapoor, grand-nephew of 2014 Dadasaheb Phalke Awardee Shashi Kapoor, narrated the Bollywood journey of the veteran actor in a special video screened at the 62nd National Film Awards ceremony.
The 77-year-old actor was unable to collect his award in person because of ill-health. Ranbir, as narrator, introduced him as 'a junoon' and 'an icon'.
Shashi Kapoor will be feted in Mumbai soon.
The cinematic presence of Shashi Kapoor, in the form of some of his popular scenes and songs from his films edited to Ranbir's voice-over, filled the void created by his absence.
The auditorium was filled with roaring applause and cheers when popular songs from his movies, like Wada karo nahi chhodo ge mera saath and Ik rasta hai zindagi, were played.
The actor, who has appeared in over 100 films, received a standing ovation when the iconic dialogue "Mere paas maa hai" from Deewar was played.
The clip also included special messages from his co-stars like Shabana Azmi, Sharmila Tagore and Amitabh Bachchan. There were also messages from family members - nephew Rishi Kapoor and son Kunal.
Shabana Azmi, who has worked with the screen icon in several films including Fakira and Junoon, pointed out that Shashi Kapoor took Indian cinema to the international platform for the first time.
"He was the first person who started working in Hollywood. Now, we feel happy when we realise that 'oh these people are accepted in Hollywood culture', but he was already there," Ms Azmi said.
Whether it was his brotherly love in Deewaar, master-employee relationship in Namak Halaal or a mischievous partnership in Do Aur Do Paanch, Shashi Kapoor shared a special bond with Amitabh Bachchan. Big B said he still admired his co-star for his dedication.
"He would accept a project even though he had to work on four different films at the same time. He would be disciplined and punctual for all of them. And I admired this," Mr Bachchan said.
Shashi Kapoor started acting in films as a child artiste in the late 1940s. His best known performances from this time were in Aag (1948) and Awaara (1951), where he played the younger version of the character played by his elder brother Raj Kapoor.
The actor was also lauded for reviving the famous Prithvi Theatre in Mumbai.
His son Kunal Kapoor shared his initial reaction after he was named for the award. "He looked at me and said 'Oh, me!'. And I said 'Yes, you'," he revealed.
Best known for his nuanced performance in memorable films like New Delhi Times, Trishul, Kabhi Kabhie, Vijeta and Kalyug, Shashi Kapoor has been absent from the arclights since the late 1990s.