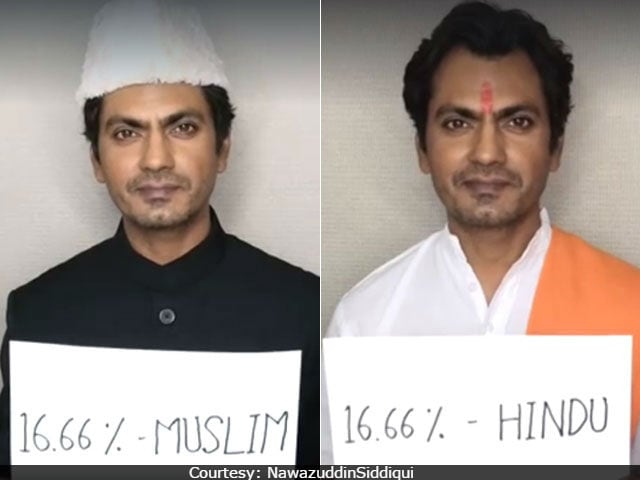 Nawazuddin Siddiqui in a still from the video (Courtesy: NawazuddinSiddiqui)

Actor Nawazuddin Siddiqui has posted a video in which he holds up placards, just as Delhi student Gurmehar Kaur controversially did - except Nawazuddin's messages advocate religious tolerance. In the short clip, the 42-year-old actor's placards introduce him and then reveal the results of a supposed 'DNA test.' Turns out that Nawazuddin is '16.66% Muslim,' '16.66% Hindu,' 16.66% Christian,' '16.66% Sikh,' '16.66% Buddhist' and '16.66% other religions' - all adding up to '100% artist.' Nawazuddin Siddiqui, whose role as writer Saadat Hasan Manto in a new biopic is generating headlines and interest, posted the video on his social media accounts. Watch it here:

Nawazuddin's post comes a week after singer Sonu Nigam tweeted about being woken up by the azaan or morning call to prayer. In a series of tweets, Mr Nigam, wrote, "God bless everyone. I'm not a Muslim and I have to be woken up by the Azaan in the morning. When will this forced religiousness end in India." He protested against the use of loudspeakers and used the term 'gundagardi.' A fierce debate followed and Mr Nigam also shaved his head after a Muslim cleric offered a reward of Rs 10 lakh to anyone who would do so.
Gurmehar Kaur, a student of Delhi University and daughter of a fallen soldier, was the focal point of controversy In February, after she was trolled for a similarly styled video she posted last year. She was trolled for a placard which read: "Pakistan did not kill my father, war killed him." Eventually, Ms Kaur withdrew from a protest against campus violence in Delhi's Ramjas College, about which she had written a Facebook post blaming the BJP-linked student outfit ABVP.
Nawazuddin Siddiqui is the star of films like Gangs Of Wasseypur, Bajrangi Bhaijaan, Manjhi: The Mountain Man, Kahaani and Talaash. He last featured in Shah Rukh Khan's Raees and will be next seen as the title character in Manto, directed by Nandita Das.