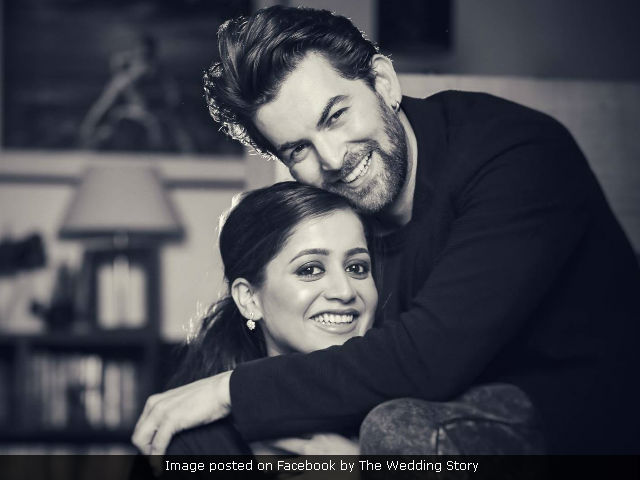 Neil Nitin Mukesh's pre-wedding photoshoot spells is pure love. Shared by The Wedding story on Facebook, the photoshoot is in monochrome graph. Neil Nitin Mukesh, 34 and his finacee Rukmini Sahay, 27, look like they're on the sets of a Sooraj Barjatya movie. Neil and Rukmini got engaged in October last year and the wedding rituals - complete with sangeet and mehendi - will reportedly start from February 7 in Udaipur. Though the engagement was a close friends and family affair the wedding is expected to extravagant and the wedding cards have been distributed in the film industry.
But first, take a look at this pre-wedding shoot:

Neil and Rukmini's wedding hashtag is #MineForever and The Wedding Story described their journey as: "They met through family and a few meetings later they knew they were irrevocably in love when they found home in each other."
Of the aforementioned wedding card, actress Aarti Chabaria shared the card on Twitter:


What an awesome #weddingcard!Heartfelt congratulations 2 ur entire fly & U. Loadsa love to this cutest couple Rukmini & @NeilNMukeshpic.twitter.com/kTAHj3IIAb

Neil Nitin Mukesh in an earlier interview to news agency IANS described Rukmini as "just perfect" and said that there "chemistry is outstanding." He told IANS: "I think she (Rukmini) is just perfect. She is the perfect balance that any man would want in his woman. She is simple, beautiful, loving and all the awesome adjectives I can think of. She fits them all. Our chemistry is outstanding. She understands that I am a little bit of a prankster. I have a habit of joking around and sometimes people don't understand my jokes. They might get offended sometimes, but she instantly understood the kind of person I am and laughed at every point. She completely understands me in that sense. I love her for that."
Neil Nitin Mukesh was last seen in 2016's Wazir and before that in Salman Khan's Prem Ratan Dhan Payo. He will be next seen in Madhur Bhandarkar's Indu Sarkar.