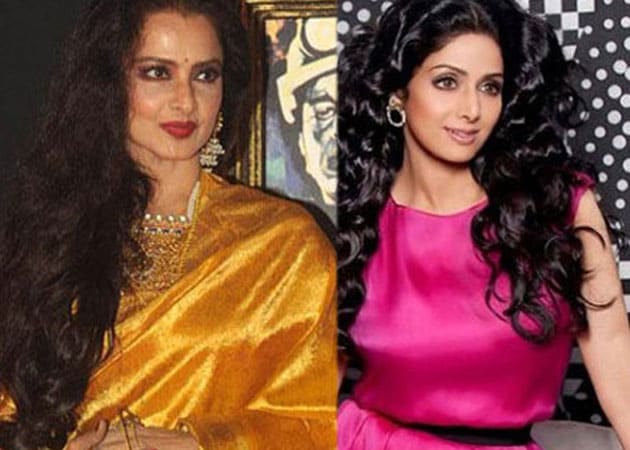 Bollywood stars such as Irrfan Khan, Rekha and Sridevi are among those actors have either changed their names or dropped their surnames

No arguing that some specific surnames carry a certain amount of clout despite a rush of young actors from outside the industry who have taken Bollywood by storm in recent times.

No arguing that some specific surnames carry a certain amount of clout despite a rush of young actors from outside the industry who have taken Bollywood by storm in recent times. No wonder that some of our actors are more than keen to drop their famous last names, to have their acting chops shine through without having to carry the baggage of the tried-and tested.
Irrfan
Last release: The Lunchbox
Name check: Hailing from Rajasthan, the celebrated actor's full name is Sahabzade Irfan Ali Khan. He's commonly known as Irrfan Khan. However, he recently decided to let go the surname and add an 'r' to his first name. Going by the way his career has been sky-rocketing, looks like his gamble has paid off handsomely.
Tusshar
Last release: Bajatey Raho
Name check: Taking a leaf from his father, Tusshar Kapoor too decided to drop his last name. In July, the Golmaal actor took to Twitter to request his fans and the members of media to refer to him as Tusshar - not Tusshar Kapoor. Interestingly, he has retained the extra 'r' in his first name.
Raj Kumar
Last release: Kai Po Che!
Name check: According to the young actor, he always found Raj Kumar Yadav too long for a name. In fact, people would approach him and ask whether he is Rajpal Yadav's brother! He prefers Raj Kumar now or just Raj.
Prateik
Last release: Issaq
Name check: About two years ago, the son of late Smita Patil and Raj Babbar decided to go ahead with his first name. As expected, there were evident consternations from his family's end. Apparently, the 26-year-old didn't want his khandaan's name to influence his acting career in any way.
Girish Kumar
Last release: Ramaiya Vastavaiya
Name check: Being the son of a film producer might be advantageous in its own sweet ways. But Ramesh Taurani's son went on record and said that sharing a popular surname brings along huge share of stress too. As a result, the debutant said goodbye to his family title and uses the ubiquitous Kumar.
Yuvika
Last release: Enemmy
Name check: This starlet who made her Bollywood debut with a small part in Om Shanti Om dropped Chaudhary from her name. According to her, she didn't consult any numerologist to do so. It's her instinct that using her first name would help her better in her career.
In the past
Going with only one name is not uncommon. There has been a bevy of stars who didn't use or rely on their surnames...
Rekha: Originally named Bhanurekha Ganesan, the half-Tamil, half-Telugu actress preferred to not make the most of her actor-parents' legacy even during her struggling days in Bollywood.
Sridevi: Inarguably the first female superstar of Bollywood, this actress of Tamil origin never employed her surname and built a memorable career with just a one-word name.
Govinda: Born Govinda Arjun Ahuja and nicknamed Chi Chi, the Punjabi boy from Virar went on to star in over 130 films. Simply put, he made it with a name that clicked with the masses.
Tabu: The Hyderabad-born actress was initially named Tabassum Hashmi but when the industry reckoned, she condensed it to Tabu.
Kajol: Belonging to the illustrious Mukherjee-Samarth family who made early advents in Indian cinema, Kajol made sure not to use her surname as she went solo.
Southside story
South actors generally stick with one-word names. Not only Rajinikanth, Mohanlal, Mammootty and Chiranjeevi, even the younger lot identify themselves without any sign of their surname. This includes Dhanush, Prithviraj, Vikram, Suriya, Madhavan, Siddharth, Vijay, Ajith, Sudeep, Asin, Tamannaah, Taapsee, Amala, Sneha and Mallika.