New Chashme Baddoor to face-off with zombie film this Friday 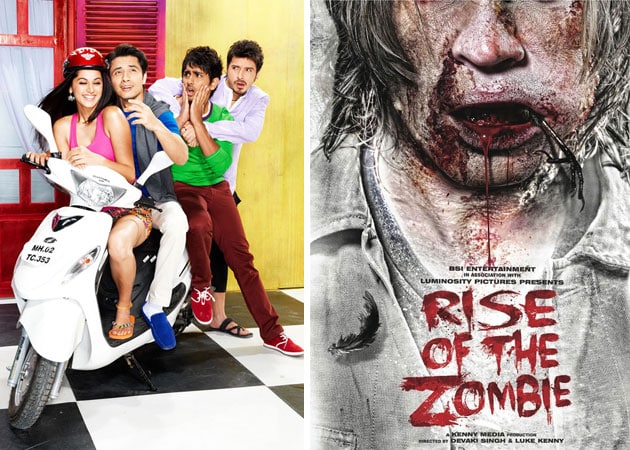 The remake of Farooque Shaikh-Deepti Naval's classic hit will compete with a zombie thriller at the box office.

Chashme Baddoor, a remake of the 1981 film, about three friends will release alongside Rise Of The Zombie, touted as the country's first zombie horror thriller this Friday.

Chashme Baddoor, a remake of the 1981 film, about three friends will release alongside Rise Of The Zombie, touted as the country's first zombie horror thriller this Friday.
Directed by David Dhawan and produced by Viacom 18 Motion Pictures, the new Chashme Baddoor features Ali Zafar, Siddharth, Taapsee Pannu and Divyendu Sharma in the lead roles.
The original, produced by Gul Anand and directed by Sai Paranjpye, revolved around three students living in Delhi - Siddharth (Farooque Shaikh), Omi (Rakesh Bedi) and Jai (Ravi Baswani) - and what happens when they meet Neha (Deepti Naval).
David Dhawan said his film carries the same soul as the original, but with some obvious changes.
"As far the story is concerned, it has the same soul, but that film was made 30 years ago. It was a very good film of those times and I have tried that my film does justice to the old one. It is made keeping in mind the taste of today's youth," he said.
Chashme Baddoor also stars Rishi Kapoor, Juhi Chawla and Anupam Kher.
On the same day, Rise Of The Zombie co-directed by Devaki Singh and Luke Kenny, is coming out.
Featuring Luke as well as Kirti Kulhari, Ashwin Mushran and Benjamin Gilani, the film revolves around Neil Parker, a passionate wildlife photographer who pays more attention to his work.
As a result, his relationships with the real world suffers. When his girlfriend walks out on him, he resigns himself to isolation.
The story follows his journey into the darkness.
Made on a shoestring budget of Rs 4 crore, Rise Of The Zombie is about transformation of a man into a zombie.
Keeping the story simple was a challenge for the team, says Luke. "It is part one of a zombie trilogy," he said. "Every story should begin in a simple way and that is what we have tried. That has been the most exciting challenge - to keep it simple," he added.