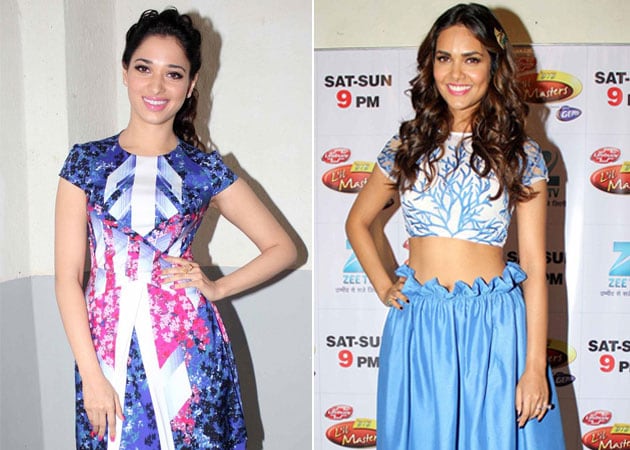 Bollywood actresses Tamannaah and Esha Gupta, who will be seen in Sajid Khan's Humshakals, are of the same mind when it comes to sex comedies as both are not comfortable with the genre.

Bollywood actresses Tamannaah and Esha Gupta, who will be seen in Sajid Khan's Humshakals, are of the same mind when it comes to sex comedies as both are not comfortable with the genre. (Also Read: No Bikini, No Kissing On Screen For Tamannaah)
Esha, who appeared in bold outfits in Jannat 2 and Raaz 3, is not comfortable doing a sex or adult comedy. "I would not do a sex comedy as I don't understand it.
When I did Jannat 2 and Raaz 3, people kept telling me I was bold, but we did not make fun of the term bold or sex, we presented it as an art," Esha told PTI.
"I wonder how people make jokes on sex. There are films like Grand Masti and others which do good business. There is a market for it and it is ok. But I won't be ok being part of sex comedy films," Esha added.
Sharing similar sentiments is her Humshakals co-star Tamannaah, who also won't do it (sex comedy). "I watch films with my family so I don't want to do something that I am not comfortable doing. There is a market for sex comedy films. There is a section of audience that enjoys such films. I enjoy watching and doing romantic-comedy films, comedy films and intense films," Tamannaah said.
In Humshakals, leading lades Bipasha Basu and Esha Gupta will be seen sporting bikinis. While Tamannaah had reservations wearing them.
"I am wearing shorts in the film and not bikini. I have set a rule of not wearing bikinis and not kissing on screen, I still stick to that. I won't do anything that I am not comfortable with," Tamannaah said.