"That's right! While I'm a fan of Akshay sir and love Reema Kagti's films but reports that I'm playing his wife in the film Gold not true," tweeted Swara Bhaskar 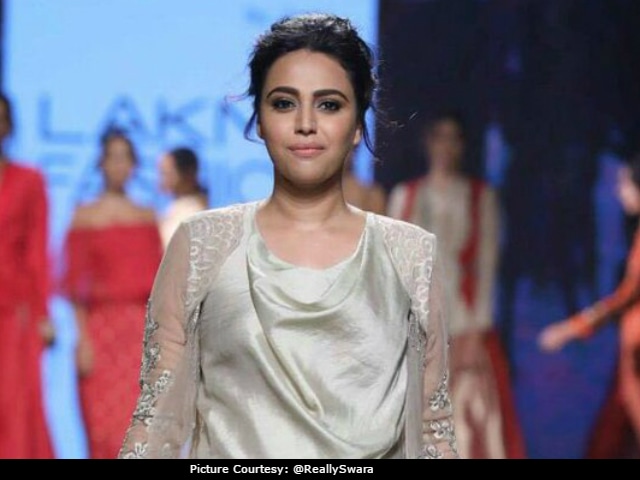 Swara Bhaskar plays the role of a feisty singer in Anaarkali Of Aarah (Courtesy: @ReallySwara)

Actress Swara Bhaskar has dismissed reports suggesting she had been cast opposite Akshay Kumar in director Reema Kagti's film Gold - perhaps a little ruefully because it seems that Akshay, 49, was 28-year-old Swara's 'first Bollywood crush.' "That's right! While I'm a fan of Akshay sir and love Reema Kagti's films, but reports that I'm playing his wife in the film Gold not true," she tweeted. "Nope. Not true. But he was my first Bollywood crush and his was the only poster in my room through my teen years," she wrote in a separate tweet.

Gold will be helmed by Reema Kagti, director of Talaash, and is a biopic of hockey player Balbir Singh, who was on the team that won Olympic golds in 1948, 1952 and 1956 at the Olympics - the gold of the film title.
Perhaps a more age-appropriate actress will be cast as Akshay Kumar's wife - we live in hope. Akshay appears with Taapsee Pannu in Naam Shabana, Bhumi Pednekar in Toilet: Ek Prem Katha, and Sonam Kapoor and Radhika Apte in Padman. He was last seen in Jolly LLB 2.
Swara Bhaskar is currently busy promoting her upcoming release Anaarkali Of Aarah, also starring Pankaj Mishra. Anaarkali Of Aarah is the story of a feisty singer from Arrah in Bihar and deals with how the central character handles sexual harassment.
Swara Bhaskar is the star of the Tanu Weds Manu films, Prem Ratan Dhan Payo and Nil Battey Sannata.
Meanwhile, Akshay also has a big release coming up in 2.0, in which he plays the villain opposite superstar Rajinikanth.