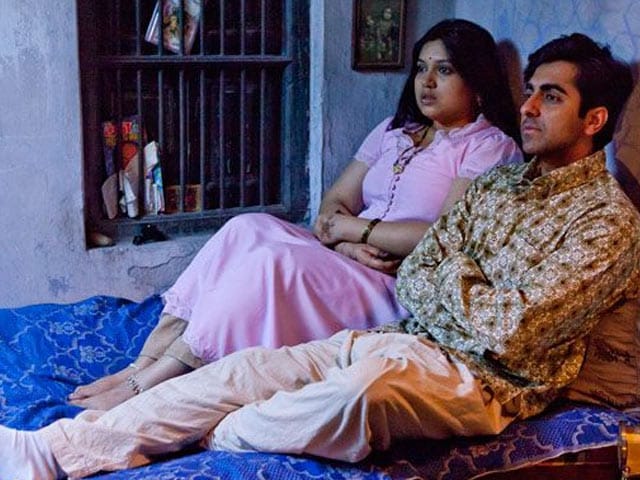 There might also be trouble in store for Aligarh, starring Manoj Bajpayee as a professor fired for being homosexual

It isn't just the word 'lesbian' that the Censor Board has done a hatchet job on in Dum Laga Ke Haisha, which released last Friday. Four Hindi cuss words have also been ordered replaced with Board-approved language.
The replacements, deemed less offensive than the original words by the Censor Board, are these - 'thenga', 'chhichoripana', 'galli ke pille' and 'kathor'. (Movie Review: Dum Laga Ke Haisha)
The Board also demanded that 'lesbian' be muted, not just replaced but dropped altogether. Board member Ashoke Pandit said on Twitter that he had not been part of the decision to blank out 'lesbian' and described it as 'shameful':

Came to know through news papers & If it's true then muting"Lesbian"in a film is shameful.I condemn it.#freedomofexpression

Dum Laga Ke Haisha, starring Ayushmann Khurrana and Bhumi Pednekar, is certified U/A, which allows 'unrestricted public exhibition but with parental guidance.'
Some weeks ago, the Censor Board declared 15 Hindi and 13 English words off-limits for filmmakers, provoking criticism from many, Ashoke Pandit included. The films Badlapur and NH10 were early casualties of the list of banned words. The phrase 'kuttey kaminey,' an old Bollywood favourite and most often used on screen by former star Dharmendra, has also reportedly been excised from upcoming film Badmashiyan.
The Censor Board list, which specifies that Mumbai be employed in place of Bombay, also places the future of Anurag Kashyap's next film Bombay Velvet which is expected to release in May 2015. There might also be trouble in store for director Hansal Mehta's Aligarh, starring Manoj Bajpayee as a professor fired for being homosexual. (Watch: Manoj Bajpayee's Aligarh Headed For Trouble?)