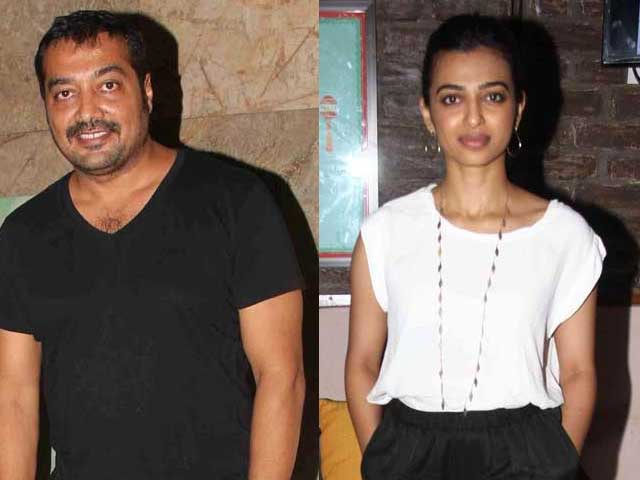 Anurag Kashyap says Radhika's clip has been taken out of context

Director Anurag Kashyap is furious after a clip from a short film he directed began circulating on WhatsApp over the weekend. The clip, which Mr Kashyap says has been taken out of context, features actress Radhika Apte in a scene that required her to be partly-nude. "She feels victimised and I feel responsible," Mr Kashyap told the Times Of India.
In the interview to the Times Of India, Mr Kashyap explains that the short film was meant to be released internationally only and was one of a series of such films. The report quotes the Bombay Velvet director as saying, "It took us so much time to do it in a non-sexual way, as it is meant to be absolutely non-sexual and we took all the care we could. It was not easy to find an actor who is brave enough to participate in it. The entire shooting crew was women as we knew that we were making something as sensitive as this. And there were girls at every stage of the post-production. At every stage of the post-production, that part was either sent blank or pixelated before being sent. So, nobody even knew who is a part of the film. And everybody assumes that since it is an Indian film, it will always be pixelated. After taking all the care, the film was delivered to New York a month back. And then, all of a sudden after a month from nowhere, this video popped up online."
Mr Kashyap says he contacted Mumbai police commissioner Rakesh Maria who activated the cyber crime branch. He also says he's 'going to spend the rest of (his) life to find this guy,' who he's convinced is an Indian living in New York: "It has to be some Indian guy there, otherwise other material from other sources that is much more sexual is available to the West and something like this does not get them excited."
Radhika Apte, who Mr Kashyap describes as 'one of the bravest actresses we have' and 'forward thinking,' last appeared in Hunterrr, produced by Anurag Kashyap's Phantom Films. She also co-starred with Varun Dhawan and Huma Qureshi in the widely praised Badlapur.
Anurag Kashyap's Bombay Velvet, starring Ranir Kapoor and Anushka Sharma, releases on May 15.