On Hrithik Roshan's Birthday, His 10 Best Insta Moments With Sons

On Hrithik Roshan's Birthday, we compiled a list of his 10 best Instagram, moments co-starring his sons Hrehaan and Hridhaan 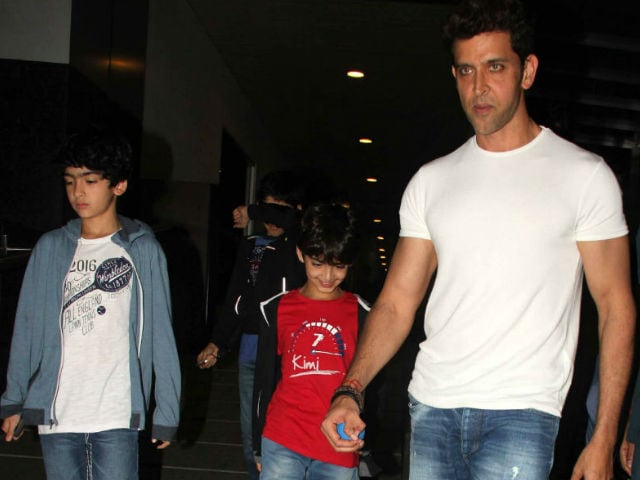 What one shares on social media says a lot about the person. Actor Hrithik Roshan, who celebrated his 43rd birthday today, is no exception. In Hrithik's Instagram diaries the best posts also co-star his sons Hrehaan, 10 and Hridhaan, 8. On Hrithik's 43rd birthday we've compiled a list of Hrithik's best pictures with his two boys and of course, they are cute as marshmallows. Hrithik was married to Sanjay Khan's daughter Sussanne from 2000 to 2014. Post their separation and subsequent divorce, Hrithik took off with his sons for vacation to exotic locations and from the pictures we're sure the Roshan trio had a blast.
On Hrithik's birthday, a look at his 10 best Insta moments with his sons:

You're welcome.
After that he starred in some memorable films like Fiza, Mission Kashmir, Yaadein, Kabhi Khushi Kabhie Gham and some forgettable ones like Aap Mujhe Achche Lagne Lage and Na Tum Jaano Na Hum. Three years after his debut, Hrithik reunited with his father to make Koi... Mil Gaya inspired from E.T.. The film had two very successful sequels Krrish and Krrish 3.
Hrithik's other popular films are Yash Raj Films' Dhoom 2, Ashutosh Gowariker's Jodhaa Akbar, Farhan Akhtar's Lakshya and Sanjay Leela Bhansali's Guzaarish. He was last seen in Ashutosh Gowariker's 2015 film Mohenjo Daro, which was a box office turkey. Mohenjo Daro, which was critiqued for its historical inaccuracies, released with Akshay Kumar's Rustom, which was a hit with movie-goers.
Hrithik Roshan is set for another box office clash in 15 days, when his film Kaabil will release with Shah Rukh Khan's Raees. Kaabil is directed by Sanjay Gupta and produced by Rakesh Roshan.