On Twitter, Anupam Kher Asks Aamir Which Country he Wants to Move to 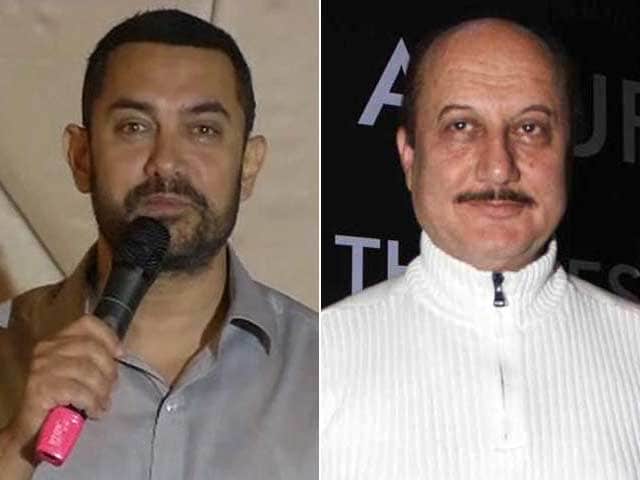 Mr Kher wrote on Twitter: Dear Aamir Khan. When did Incredible India become Intolerant India for you? Only in the last 7-8 months? Presumed country has become #Intolerant. Wat do u suggest 2 millions of Indians? Leave India? Or wait till regime changes?

In a series of tweets, actor Anupam Kher has criticized his colleague Aamir Khan's comments about 'intolerance,' particularly one in which he said his wife Kiran Rao had suggested they leave the country. (Also Read: Aamir Khan Joins 'Intolerance' Debate, Says Wife Even Suggested Leaving India)
Mr Kher, 60, put these tweets out late Monday night:


Dear @aamir_khan. Did you ask Kiran which country would she like to move out to? Did you tell her that this country has made you AAMIR KHAN.

Dear @aamir_khan. Did you tell Kiran that you have lived through more worse times in this country & but you never thought of moving out.

Dear @aamir_khan. When did 'Incredible India' become 'Intolerant India' for you? Only in the last 7-8 months? #AtithiDevoBhavah

Dear @aamir_khan. #SatyamevaJayate u talked about evil practices but gave Hope. So even in 'Intolerant' times u need 2 spread Hope not Fear.

At the Ramnath Goenka Excellence in Journalism Awards on Monday, Aamir said, "As an individual, as part of this country as a citizen, we read in the papers what is happening, we see it on the news and certainly, I have been alarmed. I can't deny. I have been alarmed by a number of incidents."
"When I chat with Kiran at home, she says, 'Should we move out of India?' That's a disastrous and big statement for Kiran to make. She fears for her child. She fears what the atmosphere around us will be. She feels scared to open the newspapers every day," he said. "That does indicate that there is this sense of growing disquiet, there is growing despondency apart from alarm."
He received support from Delhi Chief Minister Arvind Kejriwal, who tweeted: "BJP should stop silencing voices through abuses and threats. It's high time that Central government took concrete steps to instil sense of security amongst people."
Anupam Kher, whose wife Kirron is the BJP MP from Chandigarh, has challenged the notion that India is 'intolerant.' Last month, he organized a march in New Delhi and met Prime Minister Narendra Modi. He has also been a vocal opponent of the filmmakers who have so far returned their National Awards as a form of protest against what they describe as 'rising intolerance.'
On Monday, Aamir Khan said he endorsed the move by scientists, writers and filmmakers, saying, "all individuals have a right to protest and they can protest in any manner that they feel is right as long as they are not taking the law into their hands."

Over the last few weeks, in the backdrop of events that have given rise to charges of growing intolerance in India, the NDA government has come under fire from the opposition and a section of civil society. President Pranab Mukherjee has repeatedly reinforced the message of tolerance and unity and Prime Minister Narendra Modi faced questions on it during his recent trip to the UK.