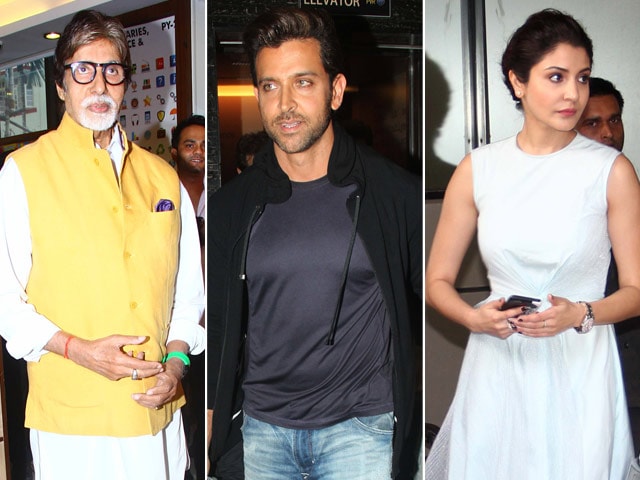 Big B, Hrithik and Anushka photographed in Mumbai.

"Deep & solemn respect for all the soldiers who fought & laid down their lives in the Kargil War. Salute from a fauji kid," Anushka tweeted


T 1940 - In remembrance of those that sacrifice their lives so we can live in peace and security ..!! JAI HIND pic.twitter.com/4ip6cnsOGW

Hrithik Roshan, who starred in Farhan Akhtar's film Lakshya, loosely based on the Kargil war tweeted:


In honor of the heroes who sacrificed their lives in the Kargil War. Proud to be your fellow countrymen. Jai hind!" #KargilVijayDiwas

Actress Anushka, who comes from an Army background, posted:


Deep & solemn respect for all the soldiers who fought & laid down their lives in the Kargil War. Salute from a fauji kid !!

Actress Preity Zinta, whose father was an officer in the Indian Army, quipped similar sentiments:


A big THANK U from the bottom of R hearts 2all the Brave Men & their families who fought 4 R Motherland Jai Hind https://t.co/KO19kqz6Tj

Actor Vivek Oberoi, who is in Nagpur to participate in a function by young military school cadets, said:


Remembering our real heroes, our braves who gave the ultimate sacrifice 16years ago to protect #india ! #KargilVijayDiwas#respect#JaiHind

Actress Raveena Tandon shared a photograph of the time she visited Kargil along with Salman Khan and Vinod Khanna to boost the morale of the soldiers.


Salute all brave soldiers who fought,n who lost their lives in Kargil their sacrifice valour,on the occasion of Kargil Vijay Diwas..


Salute to our soldiers #KargilVijayDiwas


Saluting the brave soldiers who fought and sacrificed for the nation's pride at Kargil. #KargilVijayDiwas

Saluting the brave soldiers who fought and sacrificed for the nation's pride at Kargil. #KargilVijayDiwas

Salute to our indian soldiers who gave up thier life for the nation..remembering The Heroes on #KargilVijayDiwas

The Kargil war, which began in May 1999, lasted for more than two months before Pakistani soldiers, a bulk of them drawn from its Northern Light Infantry, and irregulars withdrew from the mountain tops they had occupied overlooking the Srinagar-Leh highway.
In the conflict, the Indian Army lost 490 officers, soldiers and jawans.