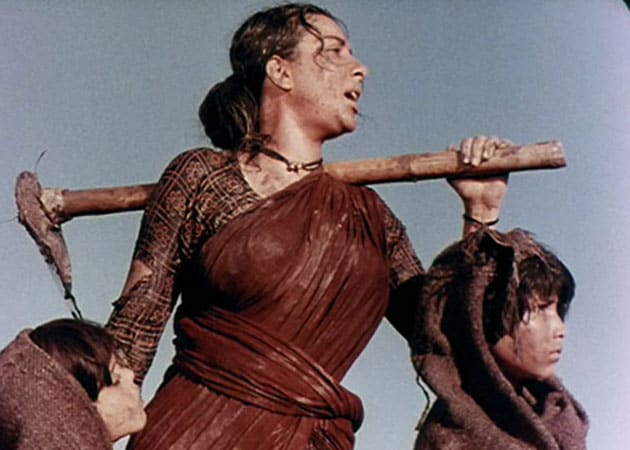 Nargis in a still from Mother India

Be it Meena Kumari in Sahib Bibi Aur Ghulam or Tabu in Astitva - the Hindi film industry has witnessed a range of actresses essaying women-oriented roles powerfully. Here's a look at the top 10 such portrayals, on the occasion of International Women's Day.

Be it Meena Kumari in Sahib Bibi Aur Ghulam or Tabu in Astitva - the Hindi film industry has witnessed a range of actresses essaying women-oriented roles powerfully. Here's a look at the top 10 such portrayals, on the occasion of International Women's Day on Saturday.
Nargis as Radha in Mehboob Khan's Mother India (1957): Nargis played Radha, the deserted wife who brings up her two sons on her own and kills one of them when he turns into an outlaw. For the first time in a Hindi film, the female protagonist was portrayed as strong and resilient, conscientious and doughty without losing her femininity.
Meena Kumari as Choti Bahu in Guru Dutt's Sahib Bibi Aur Ghulam (1962): In the feudal household where women were content wearing expensive sarees and jewellery and never mind what their husbands did with other women, this wife dared to raise her voice. If her husband liked to drink, no problem. Choti Bahu hit the bottle to have him stay at home. The portrait of a woman as the rebellious seductress opened up new doors in the way the woman was portrayed in our cinema.
Mala Sinha as Meena in Yash Chopra's Dhool Ka Phool (1959): The 'unwed mother' was an unsung entity until this film came along to shatter every myth about ideal motherhood. Mala Sinha, who was scared of what the film would do to her career, became a counsellor and guide to hundreds of girl students who wanted to know more about pre-marital sex.
Nutan as Kalyani in Bimal Roy's Bandini (1963): She can do anything for love. Even kill her beloved's nagging wife and go to jail. And when a chance to rebuild her life offers itself to Kalyani, she shuns it and runs back to the same man who unintentionally ruined her life. Love has never been blinder and the on-screen heroine never more resolute and passionate.
Waheeda Rehman as Rosy in Vijay Anand's Guide (1965): Rosy is so seductive in her whimsicality, such a non-conformist that she dumps her husband for the love of dancing and then dumps her lover when he turns out less than what she had hoped. This film gave the Indian heroine the right to defy stereotypical gender rules.
Durga Khote as Parvati in LV Prasad's Bidaai (1974): One after the other she sees her sons migrating to the city leaving her alone and defenceless to die in the village. The portrait of the matriarch as an undefeated figure of strength and sustenance was indomitably inspiring. At 65, Durga Khote was cast as the central character.
Shabana Azmi as Pooja in Mahesh Bhatt's Arth (1982): Another turning point for the heroine. Mahesh Bhatt's "Arth" gave us a deserted wife who rebuilds her life piece by piece. Finally at the end she says no to the man who wants to support her. This was the heroine's first chance to say no to love when it knocked on her door.
Tabu as Aditi in Mahesh Manjrekar's Astitva (2000): She dared to tell her husband that she had an affair in his absence and was willing to suffer the consequences. Tabu's performance as the repressed Maharashtrian housewife who finds her identity after being ostracized by her son and family, was a dazzling display of femininity.
Smita Patil as Sonbai in Ketan Mehta's Mirch Masala (1987): The 'woman as prey' when under attack had no choice but to pray - until Smita Patil in this film, who refuses to give in to the powerful subedar's lurid leering advances. The metaphor of the chilli factory as the fortress for female protection showcased Patil's powerful performance.
Madhuri Dixit as Ketaki in Prakash Jha's Mrityudand (1997): Quickly she gets sucked into the patriarchal tyranny of her newly married husband's village. And when he is killed, she takes to the gun to avenge his death. Madhuri as 'Murder India' set the screen on fire.