Padma Awards: When Anupam Kher Got a 'Flashback of Life'

"As I get ready for #PadmaAwardsCeremony I have a flashback of my life. Journey of a small town boy. Thank You India 4 d Love," Anupam Kher posted on Twitter. The 70-year-old actor was given the Padma Bhushan by President Pranab Mukherjee at Rashtrapati Bhavan in New Delhi 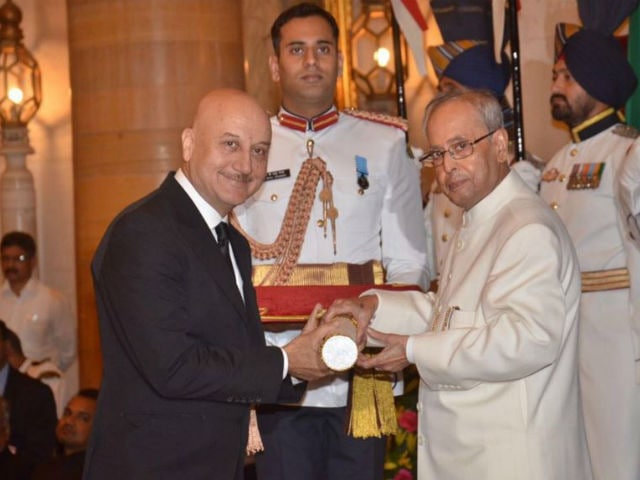 This image was posted on Twitter by Anupam Kher

Actor Anupam Kher, who received the Padma Bhushan on Monday, said that he got a "flashback" of his life while getting dressed for the Padma awards held in New Delhi on Monday.
The 60-year-old actor had posted on Twitter:

As I get ready 4 #PadmaAwardsCeremony I have a flashback of my life. Journey of a small town boy. Thank You India 4 d Love.#PadmaBhushan

Mr Kher was accompanied by:

Mr Kher has been in the Hindi film fraternity for over two decades and has been part of films like Saaransh and A Wednesday. His Hollywood filmography boasts of films like Silver Linings Playbook, which also starred actors Bradley Cooper, Jennifer Lawrence and Robert De Niro.
Late Dhirubhai Ambani, Sri Sri Ravi Shankar, Ajay Devgn and Saina Nehwal were also given Padma honours by President Pranab Mukherjee at Rashtrapati Bhavan.