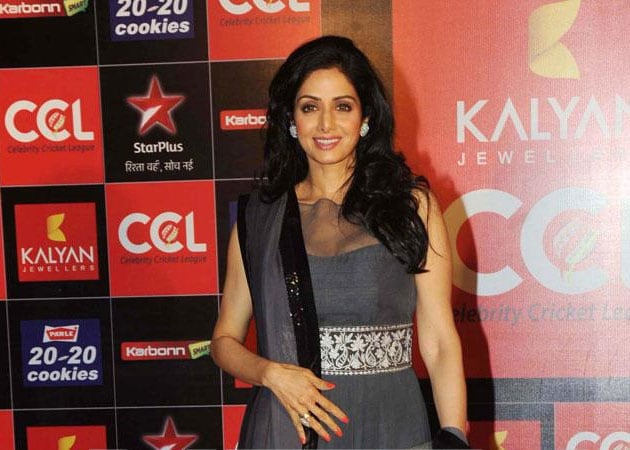 Sridevi says she does not hanker after any awards

Sridevi, who made a comeback to acting with English Vinglish, says "acknowledgement and recognition from authoritative quarters are important to every artiste".

Bollywood diva Sridevi, who lately made a comeback to acting with English Vinglish, says "acknowledgement and recognition from authoritative quarters are important to every artiste".
"It's my good fortune that people still love me and want me on screen. The Padma Shri came as a very pleasant surprise. I am deeply honoured," said Sridevi.
"I don't know what I did to deserve it. But I must have done something right to be honoured by our government," added the actress, who after creating magic on the silver screen in the 1980s and 1990s tied the knot with producer Boney Kapoor in 1996 and quit movies.
There had been a profound sense of dismay when earlier during the month Sridevi seemed to have missed out on the popular awards for her stellar performance in English Vinglish.
But the actress of timeless movies like Sadma, Lamhe and Chandni said: "At this stage in my life and career, I don't hanker for any awards. But the Padma Shri is special. It shows that the government has recognised my work, and that feels good. Acknowledgement and recognition from authoritative quarters are important to every artiste."
Though Sridevi is not going to go out of her way to seek acting assignments at this stage, she is still enthusiastic about her career.
"I started young when I was six. But I don't feel I've been acting for so many years. I still approach every film and role like it's my first. Though English Vinglish was my director Gauri Shinde's debut film, I felt like a newcomer as much as she did. It is very important for an artiste to be excited about her work in every phase of her career. If a tiredness seeps into one's attitude it will show in the quality of one's work Somewhere I think my honesty towards my word is being acknowledged by the Padma Shri. That I've managed to go so far in my life is all due to the support of my fans and well-wishers and my husband Boney," Sridevi said.
The actress, who did her first film as child artiste in 1967, is a mother to two daughters one of whom, the elder Jhanvi is said to be poised for a movie career.
The proud and protective mother laughs off these rumours.
"Jhanvi is just 16. She needs time to see the world and understand herself and her interests. At the moment, the two of us are busy together sharing a girl camaraderie. We're friends before being mother and daughter. We go out shopping together for clothes. We go to movies together. It's nice to be re-discovering my own teens through my daughter. I never had a chance to do all the normal girlie things. I was busy working," Sridevi said.
Sridevi recently shot for a magazine cover with both her daughters Jhanvi and Khushi.
She said, "It was great fun. But it doesn't mean anything more. It certainly doesn't signal my elder daughter's film career. Like I said, she's too young to be thinking of career. Let her have fun."
Sridevi, whose career as Hindi film heroine took off with a bang in 1983 with the potboiler Himmatwala, is open to more acting offers.
"But it has to be something that appeals to me as an actress, like English Vinglish. At this juncture of my life, I am not hankering to face the camera. I've done every kind of role. It's the real-life mom's role that I enjoy the most," she said.