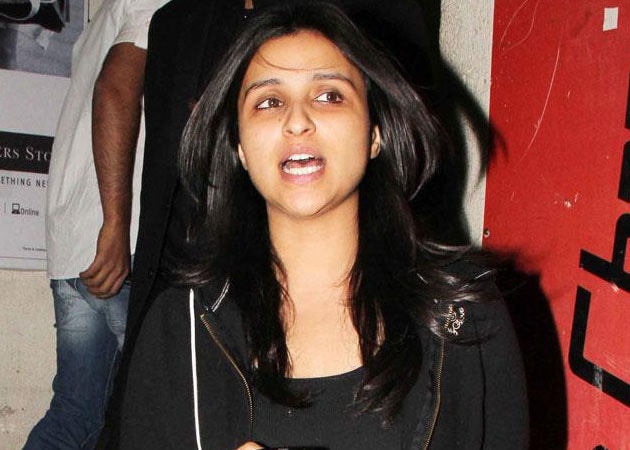 Busy as a bee, Parineeti Chopra has a lot on her plate and says she is enjoying her work and doesn't feel threatened by her contemporaries.

Busy as a bee, Parineeti Chopra has a lot on her plate and says she is enjoying her work and doesn't feel threatened by her contemporaries.
"This is my fourth year in the industry. And I'm doing the work that I am really enjoying," said the actress who is rubbing shoulders with the likes of Anushka Sharma, Deepika Padukone and Sonakshi Sinha.
With seven films to her credit, Parineeti says she is far more alert and anxious.
"Initially, I had nothing to lose. But with every passing film there are more expectations to live up to... There is a checklist of directors and actors you want to work with. The dreams expand and so do the anxieties. I want to be known for being versatile. So I'll search now for the roles that take me to another level."
The spirited scene-stealer says she doesn't see any of her contemporaries as rivals.
"I don't really feel anyone is a threat. There is enough room for everybody. That's how I feel right now. Maybe two years down the line, I'll start peering anxiously over my shoulder. But at the moment I'm happy to be just doing the work that I am," said the actress who debuted with Ladies Vs Ricky Behl.
Parineeti has no regrets about opting out of Shoojit Sircar's next film Piku, in which she was to play Amitabh Bachchan's daughter.
"The dates clashed with another film. I was so looking forward to it because it gave me a chance to work with two of the finest actors we have - Bachchan saab and Irrfan," she said and added: "Maybe it was too early for me to work with these stalwarts. I'd have probably forgotten my lines and just stared at them."
As for losing out on the chance of doing a father-daughter film with the Big B, Parineeti said: "I have a very strong father-daughter bonding with Anupam Kher sir in Daawat-e-Ishq. As for Bachchan saab, I'm sure I'll have other opportunities to work with him."
"The audiences saw a new me in Hasee Toh Phasee. Now they'll see me in an entirely new avatar in Shaad Ali's Kill Dill. I've lots on my plate. Till the release of Hasee Toh Phasee, I was shooting two films, dubbing and promoting. There was no time for myself. And I can't complain. Good scripts are coming my way. Obviously I can't say yes to every film and endorsement that comes my way." About losing out on the popular awards this year, the pragmatic Parineeti said: "Deepika Padukone deserved them. It would have been odd if I or anyone else got them. But I was nominated. And I was very happy."
Having worked with Ranveer Singh, Arjun Kapoor, Sushant Singh Rajput, Siddharth Malhotra and Aditya Roy Kapoor, Parineeti says she's close to all of them.
"But there is a special bonding with Arjun. We spent three months shooting together in Lucknow. Now I've spent a lot of time shooting with Aditya in Hyderabad. So these two are my favourites," said the actress.