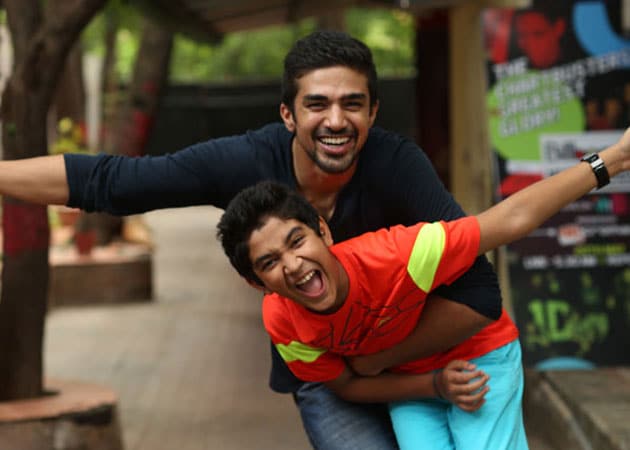 A still from the movie Hawaa Hawaai

In Hawaa Hawaai, young Partho Gupte's roller-skating coach is played by Saqib Saleem. However, the young actor's real-life coach on whom Saqib's character is modelled, is Ajay Shivlani, who runs the skating school Rollfit in Mumbai.

In Hawaa Hawaai, young Partho Gupte's roller-skating coach is played by Saqib Saleem. However, the young actor's real-life coach on whom Saqib's character is modelled, is Ajay Shivlani, who runs the skating school Rollfit in Mumbai.
Partho, who learnt roller-skating from scratch for his role as the underprivileged dreamer Arjun Harishchandra Waghmare, is now so adept at the sport of his training that the boy intends to pursue skating long after the film is released and over. (Also read:Saqib Saleem: Was moved by Hawaa Hawaai script )
His appreciative coach Shivlani said, "It's very rare that any coach would get such an opportunity to be a part of a full-fledged film that promotes one's sport and gives credibility to his passion.
"We did have someone like Arjun Harishchandra Waghmare in our class. Only he didn't have a past like in the film, was from not so lucky background but was raring to accomplish his dream in the world of speed skating."
"He was our student for more than 12 years and proved his mettle at the district, state and national level competitions. He was a gold medallist and overall state champion in his age group for six years at a stretch."
Shivlani is all praise for Partho's abilities.
"His camaraderie with other skaters during class practice and shooting, or even with Saqib Saleem or the band of boys speaks for his simple and down-to-earth, easy going attitude," Shivlani said.
"I'm absolutely confident about Partho being one of the finest actors in our country. Partho, as Arjun Harishchandra Waghmare, managed to ignite lots of nostalgic and delicate feelings other than holding me tight in my world of skating training." (Also read: Amole Gupte's Hawaa Hawaai to release on May 9 )
Partho's father director Amole Gupte cautions against heaping praise on his son.
"My wife Deepa and I are not sure we want Partho to hear all this praise. He is too young for adulation. He is learning. He's passionate about his guitar and about his skating. I want him to be dedicated to every positive experience in life," Amol said.
"Luckily for us, Partho didn't lose his bearings when he was heaped with recognition for my first film with him Stanley Ka Dabba, including a National Award. We are sure Partho will deal with maturity with the recognition he gets for Hawaa Hawaai," Amole said.
Apparently, Amole insists that the other four child actors who play Partho's friends in the film - Ashfaque Bismillah Khan, Salman Chote Khan, Maaman Memon and Thiruptathi Kushnapelli - share the limelight with Partho.
Partho himself shows no signs of vanity.
At a special screening, he surprised, amused and embarrassed Huma Qureshi (Saqib's sister) by touching her feet.
"She is older than me. I am supposed to show respect for everyone who is older," says the wonder-kid.