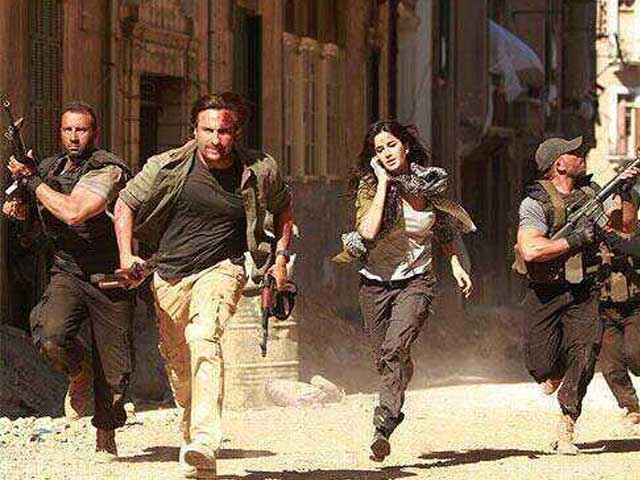 A still from Phantom

Lahore High Court judge Justice Shahid Bilal Hassan issued the order to ban the release of the film, starring Saif Ali Khan and Katrina Kaif, in the theaters in Pakistan after hearing the arguments of Hafiz Saeed's counsel and the government law officer

A Pakistani court today banned the release of Bollywood movie Phantom in the country on a plea filed by Jamaat-ud-Dawa (JuD) chief Hafiz Saeed alleging that the film, set on post-26/11 attacks, contains "filthy propaganda" against him and his outfit. Haifz Saeed is accused of masterminding the 26/11 terror attacks in Mumbai. (Also Read: Logical That Pakistan Will Have Problems With Phantom: Katrina )
Lahore High Court judge Justice Shahid Bilal Hassan issued the order to ban the release of the film, starring Saif Ali Khan and Katrina Kaif, in the theaters in Pakistan after hearing the arguments of Hafiz Saeed's counsel and the government law officer.
Before issuing a short-order on the film, which was scheduled to release on August 28, the judge observed that movies from India and otherwise were easily available after their release and asked the government what it could do to stop their availability in the market if a movie were to be banned.
"If a movie is banned in cinemas, what the government can do to stop it from being available in the market in CDs", the judge asked.
In the petition filed in the high court on August 8, Hafiz Saeed's advocate A K Dogar alleged, "There is a direct threat to the life of the petitioner (Saeed) and his associates emanating from the content of the trailer of the film.
"It is obvious that dialogues coming out of the lips of the different Indian actors and actresses will poison the minds of Pakistani public and will portray Hafiz Saeed as terrorist even though JuD has not been declared as a proscribed organisation," Mr Dogar said.
Arguing in the court, the government law officer said that since no one had sought No Objection Certificate (NOC) from the government for the release of the movie in Pakistan the petition was "useless" and should be dismissed.
"The petitioner is unnecessarily trying to involve the government," he said.
Based on crime author Hussain Zaidi's novel Mumbai Avengers, Phantom is set in the aftermath of the 26/11 Mumbai attacks and deals with global terrorism.
The Pakistan censor board had yet not cleared the film for screening in the country.
Since the government allowed exhibition of Indian films in Pakistan, the Censor Board has been careful about not allowing screening of Indian films which deal with the subject of Pakistan, terrorism and ISI.
Previously, Saif Ali Khan's Agent Vinod and Salman Khan's Ek Tha Tiger were also banned from being screened in cinema halls in the country although they are freely available on CDs and DVDs in Pakistan.