Piku and Ghare Baire: At Home in the Worlds of Bollywood and Tagore 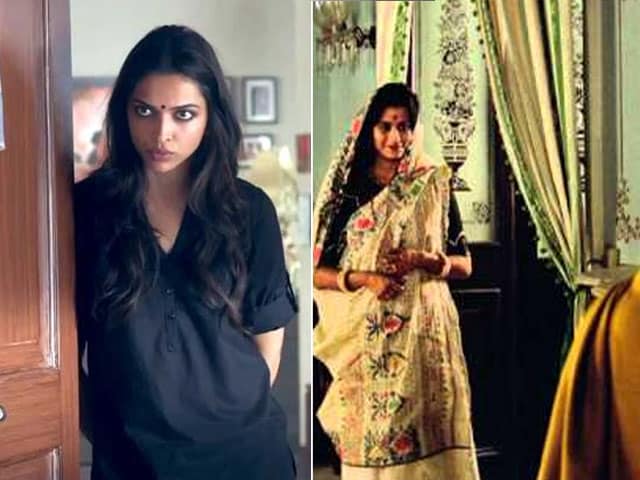 Stills from Piku and Ghare Baire

Piku is about relationships, identity and self, notions of dependence and independence and about the role of women at home and outside it. This is also the central philosophy in Satyajit Ray's 1984 film Ghare Baire

Piku is a film about many things, told in a manner as 'audbhoot' (Bengali for remarkable or marvelous) as Bhashkor Banerjee's final motion. Piku is about relationships, identity and self, notions of dependence and independence, the idea of belonging. It is a comment on modern life, social and family structure and the daily business of living. At its heart - the way to which lies through the stomach and its rumblings or lack thereof - Piku is also about the role of women at home and outside it.
As Juhi Chaturvedi writes her, Piku is a working professional somewhere in the region of 30. She manages her hypochondriac father with the same brusque efficiency she applies to her career. Piku is smart and articulate and often very short with other people. She is democratic in her disdain, treating her father, their domestic help Bhudan, her friend with benefits who is also her partner at work, the taxi drivers who ferry her to and from work, and the owner of the taxi service with equal abruptness.
Her father Bhashkor Banerjee is 70 or thereabout, imagines himself very ill and is obsessed with the workings of his innards. If Piku is brusque, Bhashkor Banerjee is downright rude. He's unpleasant and offensive to everyone he speaks to without discrimination. Among the many denouncements he makes is that in which he condemns his dead wife who dedicated her life to looking after him and the home. Mr Banerjee considers this testimony to being of 'low IQ.' "I wanted her to have a life outside the house," he announces at the dinner table.
This is also the central philosophy in Satyajit Ray's 1984 film Ghare Baire, an adaptation of Rabindranath Tagore's 1916 novel of the aristocratic Nikhilesh, his wife Bimala, and their revolutionary friend Sandip. A love affair between Bimala and Sandip begins and eventually ends, with Nikhilesh telling his wife exactly what Bhashkor Banerjee tells his guests - that he wants her to have a life outside the home. The gentle and genteel Nikhilesh's bedside manner is far more courteous than that of the abrasive Mr Banerjee but the sentiment is exactly the same, expressed several decades apart.
When Nikhilesh urged his wife to search for identity in the early 1900s, it created a furore. Women simply did not look for a life beyond home and hearth, not even women in books. Both men - the landed Nikhilesh and Bhashkor Banerjee of C-124 Chittaranjan Park - are unlikely feminists, at first glance. Nikhilesh is refined and peace-loving to the point of passivity, lacking the fire and fervor that attracts Bimala to Sandip. Neverheless, it is he, perceived as weak by many around him, who challenges and breaks with tradition rather than the radical but self-serving Sandip.
In the 21st century Delhi, Bhashkor Banerjee appears as opinionated and selfish as Sandip in colonial Bengal. He tells Piku that she must never leave him just as he hadn't left her, and declares her "not a virgin" to a potential suitor not as evidence of her independence but as a stick to fend off said suitor with. When Mr Banerjee rants about the 'low IQ'-ness of homemaker women, you classify it as one of his several complaints against life and the world. The moment you discover that, in his own cranky way, Bhashkor Banerjee challenges social norms just as much as Nikhilesh does comes toward the end of the film when he tells his sister-in-law (Piku's Moni kaki) that she should have taken the job at Bata that he had helped her get several years ago even if it meant that her salary would be higher than that of her husband's.
Read between the scatological lines and it is the search for female identity, the desire to be at home in the world that drives this tale of a constipated father and long-suffering daughter. There are three women characters of note in the film and each has two selves, at home and beyond: Piku struggles between being her father's daughter and her own woman; Moni Kaki's narrative is one of unfulfilled ambition - she chose a life at home over a successful career outside it; and Piku's other aunt Chhobi Mashi alternates between being a much married woman of the world and an affectionate member of a family she constantly foists her sometimes unwanted presence on.
Piku, directed by Shoojit Sircar and starring Deepika Padukone and Amitabh Bachchan, opened on May 8 to tremendous reviews and box office business.