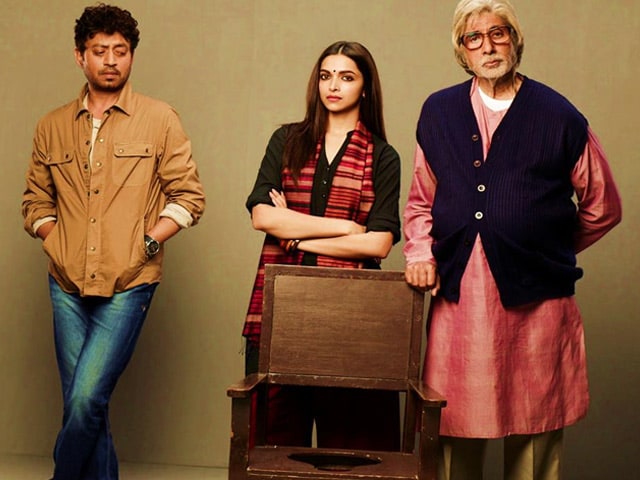 Director Shoojit Sircar's Piku may have impressed the critics, but its box office collections tells a different story. The film, starring Deepika Padukone, Amitabh Bachchan and Irrfan Khan, collected a little above Rs 5 crore on its first day. (Read Review: Piku)
However, according to film critic Taran Adarsh, the film may see a boost in collection on the second day. He tweeted:

The film explores Piku's (played by Deepika) relationship with her hypochondriac father Bhashkor Banerjee (played by Mr Bachchan), who is 'obsessed with his bowel movements'. In his review for NDTV, Saibal Chatterjee writes: "A warm, charming and bittersweet family drama, Piku turns the genre completely on its head. The result is a magnificently original film that delivers a memorably unique movie experience." He gives it 3.5 stars out of 5. (Also Read - Piku Review: Your Verdict on Deepika's Film)
Bollywood too is smitten by film. Many celebs praised Piku on microblogging site Twitter and many also singled out Deepika for delivering a powerful performance:

Pure magic in th performances by @SrBachchan@irrfan_k & a career-best display from @deepikapadukone..Bravo!! (And no, I'm not being biased)

One of the best films I have seen in a long time. It's such a gem, can't get over it.Thank you @ShoojitSircar for giving us #Piku. BRILLIANT

Can't get over @PikuTheFilm everyone from @deepikapadukone@SrBachchan@irrfan_k@ShoojitSircar@writeonj take a bow!!! Absolute pure genius

Karan Johar needed more than 140 characters to give his opinion:

140 characters to describe the most wonderful film I have seen this year is not enough...#Piku is all heart and stomach.....and so much more

@deepikapadukone has emerged as the actress of this generation....solid in silences...natural to the core and effortlessly genius! #Piku

@SrBachchan proves that only HE has the right to be called a legend! His masterful portrayal of a constipated Bengali man is brilliant #piku

@irrfan_k is so brilliantly understated!! #piku! Loved his quite romance....shoojit sircar has deftly handled this heartful slice of life!!!

Badhai ho @SnehaRajani on your instinct and the beauty of #piku!!!! Bravo and kudos!!!!!

Meanwhile, Piku is getting stiff competition with Akshay Kumar's action film Gabbar Is Back, which has now entered in its second week. The film, which has collected Rs 62 crore so far, minted Rs 2.80 crore on Piku's first day at the box office run.

Another film, which is not yet off the box office graph is Hollywood action film Avengers: Age of Ultron, which collected Rs 70 lakh on May 8, three weeks after its release on April 24.