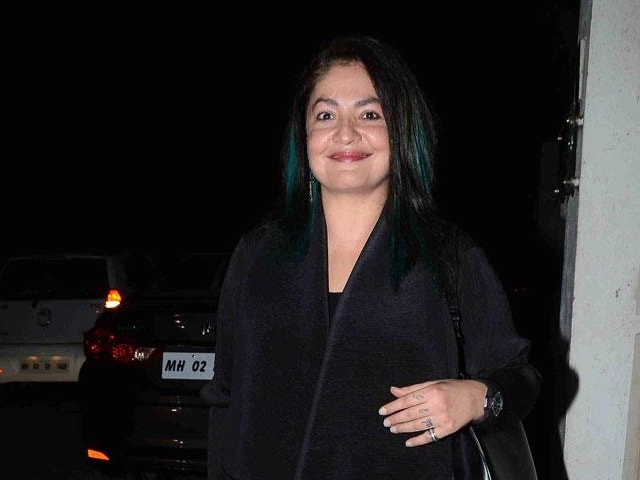 Pooja revealed her then 'boyfriend' told her, 'If you want to marry me, drop movie offers as I'll never marry an actor'

Actress-filmmaker Pooja Bhatt said that she refused to be a part of her filmmaker-father Mahesh Bhatt's romantic musical drama Aashiqui because of 'love'.
The 43-year-old actress, who made her debut with the 1989 film Daddy, said her uncle Mukesh Bhatt offered her a role in the highly acclaimed film, but she declined because her then boyfriend did not want her to be an actress.
"I had a boyfriend and I was in love with him since I was 12-year-old. When I was 16, I started dating him. At 17 I did Daddy and at 18 I was offered Dil Hai Ki Manta Nahin. So he very patiently went through the phase of my first film and said 'If you want to marry me, drop movie offers as I'll never marry an actor'," Pooja said at an event here when asked why she refused her uncle's offer.
Pooja shared insights about her life during a session on the second day of Jagran Film Festival in the Capital. The five-day gala was being held in Siri Fort Auditorium.
"Being a romantic person, I said I'll do anything for love. Then Mukeshji (Mukesh Bhatt) came to my house with signing amount for the role, but I refused the offer. He called my father and asked him to make me understand. But I never agreed to do it. And then my relationship ended with that person, though he still is a very dear friend of mine. But then life took over. So now I think I should have done the film," she added.
Produced by Mukesh Bhatt, Aashiqui, which starred Rahul Roy, Anu Aggarwal and Deepak Tiori, was both critically as well as commercially successful particularly because of its music.
A quasi-sequel to the 1990 film, titled Aashiqui 2, with a completely new theme, directed by Mohit Suri with Aditya Roy Kapur and Shraddha Kapoor in the lead, was released in 2013.
Meanwhile, Pooja, who starred in films like Dil Hai Ki Manta Nahin, Sadak, Sir and Zakhm, also said that she wants to get in front of the camera again.
"I stopped acting as I was not curious about it anymore. I was not passionate about acting. I became passionate about filmmaking. The thrill to make something out of nothing and to go out there to see whether it will work or not attracted me. But today, I feel the need to act again. I feel the need to go out there in front of the camera and let go as acting is all about letting go. I will be there very soon guys," she said.
Pooja also added that she found a place in the heart of film industry after quitting acting. "I became more part of the industry after quitting acting. I contribute greatly to the industry as I bring in talent, provide money in the chain and make it happen. During the making of 'Kabhi Na Kabhi', I realised that the process of filmmaking interests me and want to do more actively," said Pooja, who was one of the jury members for the "Indian showcase" category in the sixth edition of the film festival.
She said that was ready to explore new dimensions of acting, but on her conditions. "I'm here. But I don't need to sell myself. If someone offers a film, I'm willing to do it if it's something I have not done before or pushes my boundary," she added.
But Pooja also pointed out that women were not allowed to share their opinions in the industry.
"When I entered the industry, my parents used to give me a lot of freedom. I've lived my life freely. When I started, I used to hear from people that you can't have a boyfriend at the age of 19, I used to say 'Why not?'... The industry does not let women with an opinion and brain, get very far of the ladder because they want to look at you and they don't want to hear you. But I always tried to stick to truth. I have conscience in myself. I have a restless energy that has always prepared me to face people," she said.
Pooja, who started her Bollywood journey in her father's film, said that she wants to capture all the facets the filmmaker's life in a documentary.
"I would love to make a documentary on my father Mahesh Bhatt. What is interesting about Bhatt saab is that he became more interesting personality after he left work. It is a common perception that filmmaker's life end when he leaves a film set's, but he proved it wrong," Pooja said.
From his linkup to late Bollywood star Parveen Babi to his inebriated past, Mahesh Bhatt has never hesitated in sourcing ideas for films like Arth and Woh Lamhe from his real life. Recently released film Humari Adhuri Kahani is also loosely based on his parents' life.
Of a biopic on her life, Pooja said: "A film based on my life would not be as interesting as my father. I have not lived a life as enriching as my father. I have only been observer to his life so I think I'm the best person to make a documentary on him."
But Pooja plans to narrate her journey in a book. "Life begins at 40. I could attempt writing. Life is taking me into different directions. I think I should start jotting down my life and then start writing my auto-biography in next five or ten years," she said.
At the event Pooja also said that the media has been very kind to her. "If I look back at my 26-year-old career, the media and public have been very kind to me. When you look at the world with innocence and try to live with that innocence, than there will be no harm to you."
Pooja Bhatt was judging the sixth edition of the film fest along with music sensation Udit Narayan, ad-director and cinematographer Mahesh Aney, Malayalam cinema icon Hariharan and renowned film editor A Sreekar Prasad.