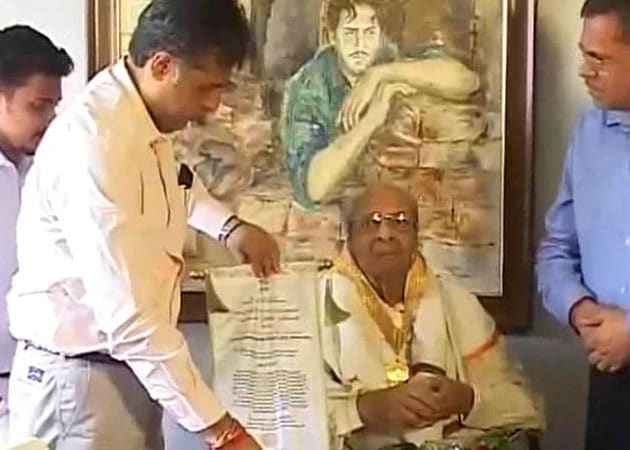 Legendary actor Pran, beloved star of hit movies like Don and Ram Aur Shyam, received his Dadasaheb Phalke award at his home in Mumbai. Pran, 93, has been unwell for the last few months and was unable to collect his award in person at the National Awards presentation ceremony in New Delhi on May 3. He received a standing ovation anyway from the audience which was drawn from the film fraternity and included actors John Abraham, Irrfan Khan, Parineeti Chopra and Nawazuddin Siddiqui.
Nobody from Pran's family were able to collect the award on his behalf on May 3. The actor was presented with the award, the highest honour the government bestows on a member of the film industry, at his home this morning.
Pran was famous for his style and sophistication on-screen, and was credited with making the role of the villain as important as that of the hero. He also played many supporting characters, apart from villains, most notable the red-haired Pathan Sher Khan in Zanjeer, the film that made Amitabh Bachchan a star. (Pics: Pran, Bollywood's black gold )
From the '60s to the early '80s, Pran appeared in almost every big film made in Bollywood. For some years, he was often better-paid than the hero and heroine.
Pran is also credited with giving Amitabh Bachchan his biggest break, having recommended that director Prakash Mehra cast him as Inspector Vijay in 1973's Zanjeer.
Pran rarely makes public appearances now. He was last spotted at Amitabh Bachchan's 70th birthday in October last year.
Minister of information and broadcasting, Manish Tewari presented the award to the veteran actor.
Watch: