Prasoon Joshi: Poem for Dilip Kumar my Tribute to the Legend 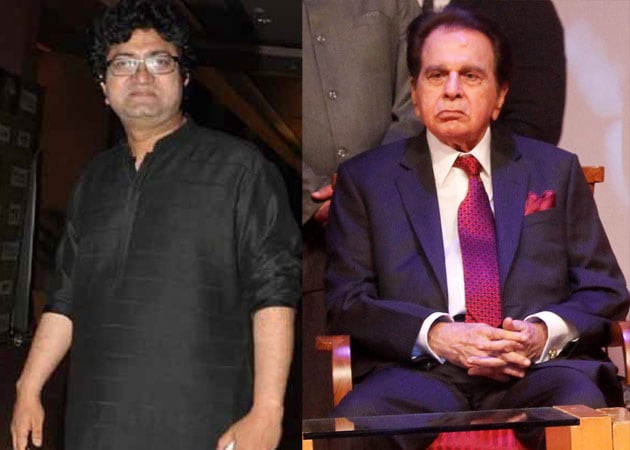 Prasoon Joshi was unable to attend the book launch ceremony as he's in Cannes for a prior work commitment.

Celebrated writer-lyricist Prasoon Joshi, who penned a special poem for the launch of Dilip Kumar's autobiography, says it was his way of paying tribute to the living legend.

Celebrated writer-lyricist Prasoon Joshi, who penned a special poem for the launch of Dilip Kumar's autobiography, says it was his way of paying tribute to the living legend.
The autobiography, The Substance and The Shadow compiled by Udaya Tara Nayar, was launched at a glittering ceremony here on Monday evening. (Also read:At Dilip Kumar's Book Launch, a VIP Guest List from Bollywood)
At the event, actor-filmmaker Aamir Khan recited the poem as Prasoon was unable to be present because he's in Cannes for a prior work commitment.
Through the poem, Prasoon portrayed Dilip Kumar as a masterpiece fit for his persona. Prior to penning it, the writer spent quality time having long discussions with Dilip Kumar's wife Saira Banu and author Udaya Tara Nayar to capture the right essence of the actor's personality.
In a statement, Joshi said, "It's a tribute to the legend in my words. For me, writing this is an honour because on one hand there is greatness of Dilip saab, and on another, it was recited by an unmatchable craftsman of our times, Aamir Khan on whose request I wrote the poem."
It is an experience that the acclaimed writer will always cherish. (Also read: Dilip Kumar's 'Chhoti Bahen,' Favourite Song and the Actor he Thinks of as a Son)
Dilip Kumar's autobiography chronicles the life of the actor, who was born in Peshawar as Yusuf Khan. In the book, he has spoken candidly about his journey, his acting career in Bombay (now Mumbai), and his struggle and success in Hindi cinema.
The momentous night of the book launch saw several faces from the Bollywood fraternity gracing the event. While Karan Johar hosted the mega book launch, veteran actress Vyjayanthimala along with Madhuri Dixit and Priyanka Chopra lit the inaugural lamp.
This was followed by Bollywood veterans Amitabh Bachchan and Aamir Khan unveiling the autobiography.
While Big B went on to read a passage from the autobiography, Aamir recited the words penned down by Prasoon.