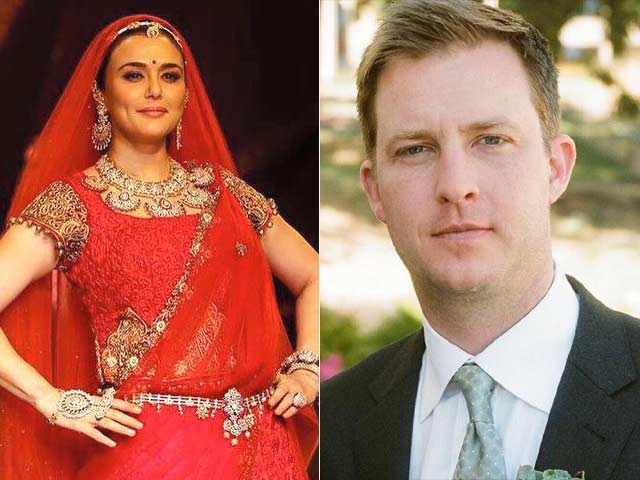 In what has to be the most sporting wedding announcement ever, the actress wrote: "I was holding on the " Miss Tag" rather seriously till now, until I met someone "Goodenough" to give it up for So now I join the Married Club folks. Thank you all for your good wishes & for all your love. Love you all. Ting ! Let the Goodenough jokes begin"

Preity Zinta, who married longtime beau Gene Goodenough on February 29 in Los Angeles, has given her fans a 'Preity Goodenough' reason to smile.(Also Read: Preity Zinta Marries Gene Goodenough, Celebs Congratulate on Twitter)
In what has to be one of the most sporting announcements, the actress, 42, wrote in a Facebook post: "I was holding on the 'Miss Tag' rather seriously till now, until I met someone 'Goodenough'." Taking a dig at her husband's surname, she added, "Let the Goodenough jokes begin."

I was holding on the " Miss Tag" rather seriously till now, until I met someone " Goodenough" to give it up for 󾌬 So now...

Preity's close friend and colleague Riteish Deshmukh was the first from the Bollywood fraternity to follow her advice:

Twitter, however, went into a joke overdrive much before the actress gave her permission. Sample these tweets soon after she was married:


Gene is Goodenough for @realpreityzinta

Congratulations poured in from all quarters:

CONGRATULATIONS to my dear friend @realpreityzinta on finally taking the plunge!Welcome to the gang Z. Big love to both of u. Eternal tings!

OMG @realpreityzinta I'm soooo happy for you. Congratulations and here's wishing u both a wonderful life ahead! Hugs https://t.co/pLOOq4usKe

HUGE CONGRATS my friend @realpreityzinta on your marriage to Gene in Los Angeles, City of Angels. Blessings! pic.twitter.com/NLBEIY6fS7

They were promptly thanked for their wishes

Thank you for all the love & good wishes folks Appreciate it from the bottom of my heart I'm touched; humbled Love u all ting

Thank you my darling AB The earth didn't shake & there was no thunderhaha !See U guys soon when Im back love ya https://t.co/K26XrKGQOJ

Preity, star of films like Dil Se, Chori Chori Chupke Chupke and Mission Kashmir and Gene, a financial analyst, will reportedly host a Bollywood-style reception in Mumbai in April.
The actress was earlier believed to be in a relationship with industrialist Ness Wadia. Ness and Preity, co-owners of the Indian Premier League (IPL) franchise Kings XI Punjab, are believed to have dated for five years between 2005 and 2009. In June 2014, the actress filed a police complaint accusing the Wadia Group scion of having attacked her at an IPL match in Mumbai's Wankhede Stadium.
Preity made a comeback with the poorly-received Ishkq in Paris (2013) which she produced as well as starred in. She was last seen in 2014's Happy Ending.