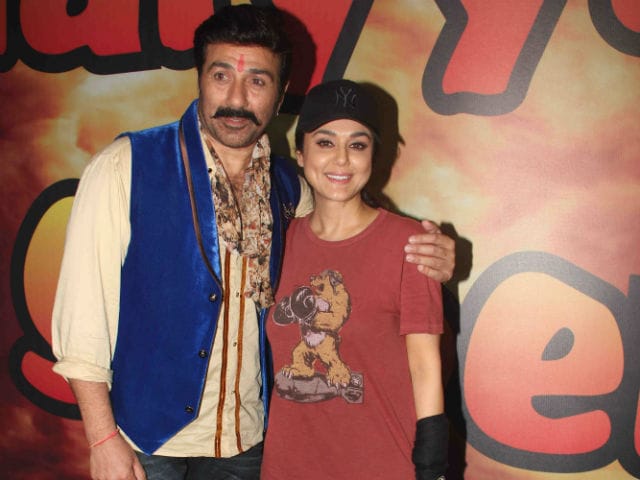 Actress Preity Zinta, who will soon be seen in Bhaiyyaji Superhitt opposite Sunny Deol, said that she is happy to work with her co-star, who is her favourite.
"I am very happy to work with Sunny. He is my most favourite," Preity said on the sidelines of the shoot of the film with Sunny.
Preity also did a cameo in Dillagi, which was directed by Sunny Deol. They also starred in films like Farz, Yeh Raaste Hain Pyaar Ke and The Hero: Love Story of a Spy.
Preity also spoke about her experience of filming with Sunny after a long time.
"It is not that long ago also. Yes, there was a break but I am very happy to be back on the sets and I have always loved the Deol family. They have always been very close to my heart. I used to be scared of him earlier but I am very happy to do this film because it is an enjoyable film," said Preity.
"After a long time, I am doing a film where I have also enjoyed doing the shots. It is always a pleasure to work with Sunny because he makes life easy as he is not just an actor, he is also a director. He always thinks about the actor which is very nice and comforting. When I had done my first film Farz, he had taken care of me," she added.
Bhaiyyaji Superhitt is Preity's first film after her wedding. Preity married Gene Goodenough on February 29 this year.
About her character in the film, Preity quipped: "I am characterless in this film. I am just being a little selfish because I am doing a film after sometime. So I want the proper promo to come up (before revealing her character)."
Bhaiyyaji Superhitt also stars Ameesha Patel.
(Except for the headline, this story has not been edited by NDTV staff and is published from a syndicated feed.)