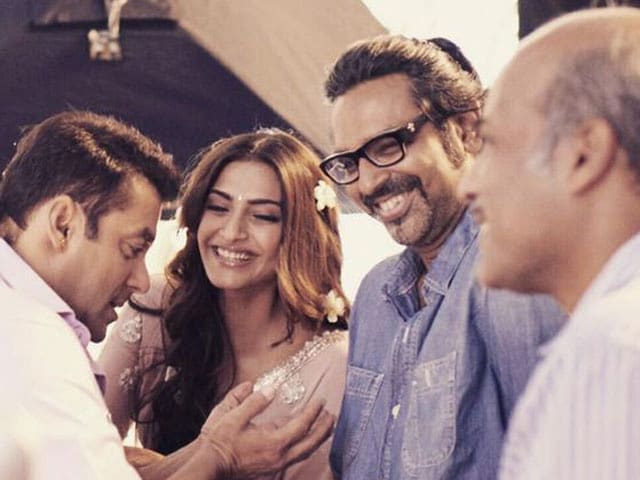 Sonam Kapoor shared the first poster of Prem Ratan Dhan Payo on micro-blogging site Twitter, which reminds one of the Rajshri romances, like Hum Aapke Hain Koun. The leading ladies may have changed but Prem continues to be the only constant factor. The film's first trailer is slated to release on October 1

Prem is back. Yes, quite literally. After Salman Khan introduced fans to his evergreen character, Prem, in the teaser poster of his upcoming film Prem Ratan Dhan Payo, leading lady Sonam Kapoor tweeted a poster of her and the actor from the film:

This does remind one of the Rajshri romances, like Hum Aapke Hain Koun and the leading ladies may have changed but Prem continues to be the only constant factor. (Also Read: Salman and Sonam Look Great Together, Says Anil Kapoor )
And with the first trailer to be unveiled on October 1, Salman and Mr Barjatya's have plans for Prem Ratan to make enough Dhan at the box office. (Also Read: The Salman Effect: Sonam Expects 'Ridiculous Figures' For Next Film )
The film which hit screens on November 12 will be released in Tamil and Telegu too, a smart move to reach out to fans across India.
It's no struggle for a Salman Khan-film to get screen space, the count being anywhere between 5000 to 7000 and with dubbing the film in regional languages will only increase the number Prem Ratan Dhan Payo hits screens. Imtiaz Ali 's Tamasha, starring Deepika Padukone and Ranbir Kapoor, will hit screens two weeks later on November 27. (Also Read: Salman Khan is Good at Romance, Says Sonam Kapoor)
Prem Ratan Dhan Payo will reportedly see Salman in a double role as a prince and professional fighter and going by the interest in the film it does seem like Diwali Dhamaka, after all two for the price of one is always a good deal.
Prem Ratan Dhan Payo also stars Neil Nitin Mukesh, Swara Bhaskar and Anpam Kher in pivotal roles.
Apart from Prem Ratan Dhan Payo, Salman Khan also has Yash Raj Films' Sultan up his sleeve. In the film, which will be directed by Ali Abbas Zafar, Salman plays the role of a wrestler.