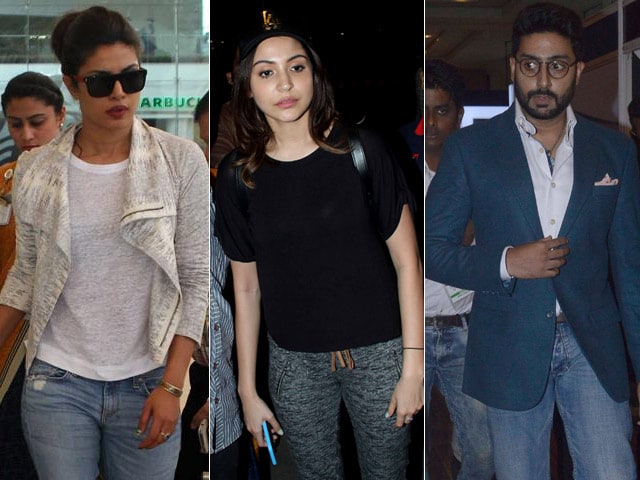 Celebs have slammed those blaming Anushka for Virat's poor show.

"So horrible to see a supportive girlfriend being lynched for a game she just watched!!" Priyanka posted on Twitter

Actress Anushka Sharma, who is being trolled on social media for her boyfriend, cricketer Virat Kohli's poor show in the World Cup semi-final against Australia, has found staunch supporters in her Bollywood colleagues, including Abhishek Bachchan, Priyanka Chopra and Rishi Kapoor. (Also Read: On Twitter, Anushka Trolled Over Virat's Poor Show)

Anushka, who was in Sydney for the match, was targeted on Twitter soon after Virat's dismissal from a mere single.

This has not gone down well with her friends and colleagues in the film industry who have tweeted their support for her. (Also Read: Anushka's Shock at Virat's Dismissal Mirrored India's)

So horrible to c a supportive girlfriend being lynched for a game she just watched!!Stop with the disrespect! #StillBleedBlue@AnushkaSharma

So happy 2 C @AnushkaSharma b there 2 support her man n her country!!Those mocking her,pick another sport..IND's spirit n Cricket not 4 U:)

Veteran actor Rishi Kapoor, with whom Anushka has worked in Patiala House said:

With you my dear Anushka! Bunch of uneducated idiots who target you. Been through this dam thing. Jakho rakhe sanyaan maar sake na koi!

Abhishek Bachchan commented on a tweet in Anushka's defence:

@anirbanblah@AnushkaSharma these are the type of people who will never have wives or girlfriends.

The venom with which Anushka Sharma is being targeted after India's defeat is not only shocking but also disgusting. Guys, get a life #shame

Blaming and joking bout Anushka??cz a woman can ONLY be a distraction and not a strength? Wht bout d other times we won or Virat made a 100?

How abt giving @AnushkaSharma the credit for @imVkohli being the best batsman in the world??!!

It's ok to be disappointed or critical. BUT these comments about Anushka are DOWNRIGHT disgusting.

@AnushkaSharma kudos 4 standing by ur man and doing what any person in love would do.Respect Spit on da faces ofthose who make fun of that.

"Why should I be responsible for Virat's performance on the field? "It's primitive to call me a distraction," she had said.