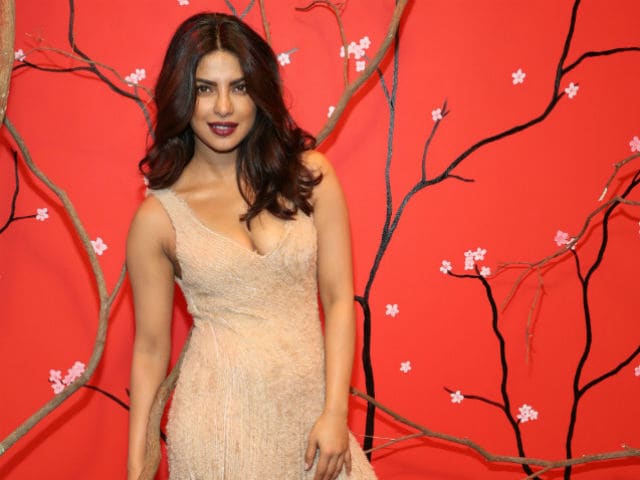 Actress Priyanka Chopra, whom we've all but lost to Hollywood, recently confessed to missing Bollywood in a live Twitter chat with fans. Responding to a tweet during the #ASKPC session, the 34-year-old actress said that she misses Hindi films and cannot wait to for her next project. Priyanka, who currently lives in New York, is busy filming the second season of her television series Quantico, on which she plays the lead. She is also making her Hollywood debut with upcoming action-comedy film Baywatch, opposite Dwayne Johnson. Priyanka, who was ranked #8 on the Forbes' list of the world's highest-paid TV actresses of 2016, presented an Oscar this year and has also been nominated for her second People's Choice Award for Quantico.
Priyanka hasn't signed a Hindi film after Jai Gangaajal, which released earlier this year, but she wore her heart on her sleeve in this tweet:

Priyanka, who plays the role of FBI-turned-CIA agent Alex Parrish in Quantico, is the first Indian actor to headline an American network series.


U look stunning @simonealex_ @therock your baby looks way better than I ever could in that outfit !! Adorable .. #alexparrish #Halloween with @repostappmy name is Alex Parrish ... it all started 9 months ago at the FBI academy.

In the Twitter chat, the former Miss World also revealed, rather cryptically, that she might appear on Karan Johar's chat show Koffee With Karan.

However, nothing has been revealed about Priyanka's possible appearance yet by the makers of the show. Next up on Koffee With Karan are Salman Khan with his brothers Arbaaz and Sohail, and Shahid Kapoor and his wife Mira. Shahid and Priyanka appeared together on season three of Koffee With Karan.
Baywatch, that is now scheduled to release on May 26, will see Priyanka in a negative role, playing a glamorous character named Victoria Leeds. The Seth Gordon-directed film also features Zac Efron and Alexandria Daddario and is based on the hugely popular 1990s television series featuring David Hasselhoff and Pamela Anderson. Priyanka earlier revealed that she won't be wearing the iconic red swimsuit worn by Pamela Anderson and others on the TV show. "I'm not a lifeguard, I'm the interruption in their slow motion," she told NDTV in an interview.