Priyanka Chopra Gets A Visitor From Bollywood In New York. Guess Who?

Manish Malhotra posted a picture with Quantico star Priyanka Chopra at her residence. 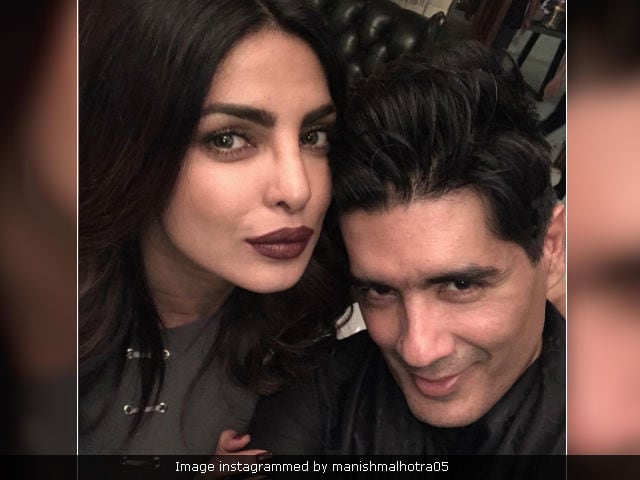 Designer Manish Malhotra, who is currently in the United States, visited his close friend Priyanka Chopra at her New York home. The 51-year-old designer recently shared a photo on social media with the Dil Dhadakne Do actress. Manish Malhotra had also hosted a dinner party for the actress when she was in India for the Christmas break. The party was attended by Sushant Singh Rajput, Dia Mirza and Tarun Mansukhani. Priyanka Chopra is currently awaiting the release of her Hollywood debut Baywatch, in which she plays an antagonist, Victoria Leeds. The 34-year-old actress will be seen sharing the screen space with Dwayne Johnson and Zac Efron. The movie is scheduled to release on May 24.
Check out the Manish Malhotra and Priyanka's adorable photo here:

Priyanka Chopra also featured on Karan Johar's chat show Koffee With Karan while she was on a break. The Mary Kom actress who made a solo appearance on the show was addressed as the 'biggest newsmaker' of the times and she sportingly downed coffee shots with Karan.
Priyanka Chopra, who stars in the American TV series, Quantico, has become a popular face in the west. The Barfi! actress, plays Alex Parrish in the show, a former FBI trainee who joins CIA in the second season. Priyanka has won two consecutive People's Choice Awards for playing the role of Alex Parrish in Quantico.
Currently, Priyanka Chopra is busy promoting her upcoming Hollywood film Baywatch. After making an appearance in popular chat shows like - The Ellen Show, The Tonight Show With Jimmy Fallon and Jimmy Kimmel Live, Priyanka appeared on The Late Show with Stephen Colbert last week.