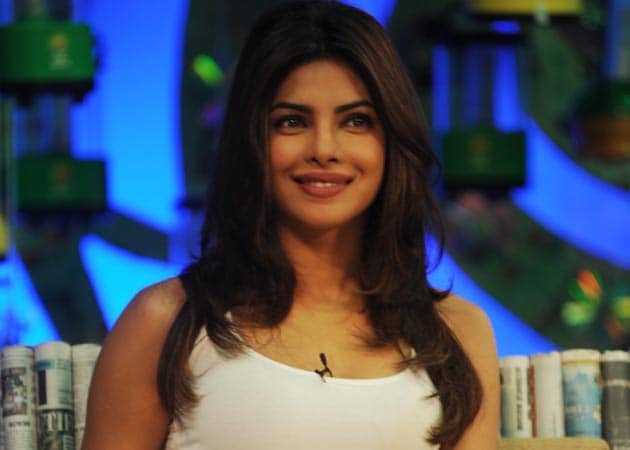 Priyanka is hopeful that that the remuneration of actresses will improve

Successful actress Priyanka Chopra, who has been part of hits like Fashion, Barfi and Dostana, on Friday said an actress' fee may not be on par with her male counterpart, but she is hopeful that soon their remuneration will get better.

Successful actress Priyanka Chopra, who has been part of hits like Fashion, Barfi and Dostana, on Friday said an actress' fee may not be on par with her male counterpart, but she is hopeful that soon their remuneration will get better.
When asked why there is disparity when it comes to sharing profits with actresses despite their having a sizeable contribution in a film's success, Priyanka told IANS on the sidelines of FICCI Frames 2014, "I don't think the contribution is as much. I think you have to give credit to the boys also.
"The films make about Rs 200 or Rs 300 crore and it has a lot to do with the boys. We (actresses) haven't made that dent into the box office as the boys have, and I am very hopeful that will happen because we have the kind of audience which is ready to watch women-oriented films.
"Yes, there is a huge disparity in terms of remuneration, but there is also a big disparity in the kind of money that has been brought back by female actors so far. I am hoping we will soon be able to break that and may be remunerations will get better."
No One Killed Jessica, Kahaani, The Dirty Picture and Queen are some of the recent women-centric films that have done brisk business at the box office.
The actress, who attended the 15th edition of FICCI Frames 2014, was in conversation with Nidhi Razdan on women-centric films being made in showbiz.
In her over a decade long career, the actress maintained a balance between parallel and masala films and she has no qualms about being a Hindi film heroine.
She said: "I am proud to be a Hindi film heroine. I am unapologetic about being a Hindi film heroine. I love Hindi cinema I love the blockbusters, but at the same time I also enjoy doing films like Barfi and Fashion."
The actress, who is also into singing, feels that women are good at multi-tasking.
"I have realised that women are good at multi-tasking and we do it really well. I was raised with music and I wanted to push myself and see what I can do. I am taking baby steps," the 31-year-old said.