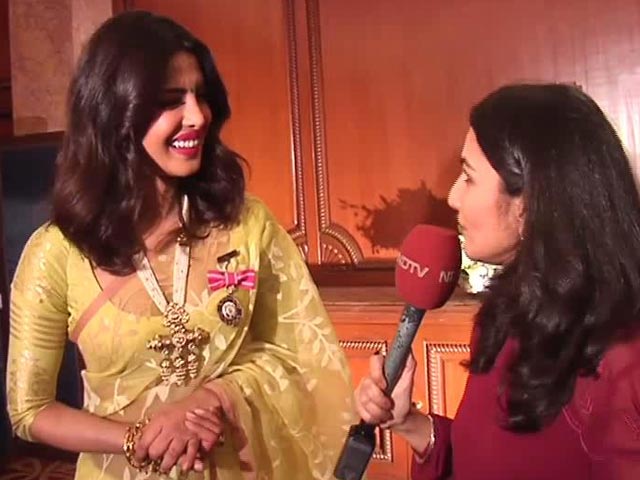 Homegirl Priyanka Chopra made a quick trip to New Delhi to receive her Padma Shri from President Pranab Mukherjee on April 12 and NDTV caught up with her before she flies back to USA to film her new movie Baywatch.
For those who want to know if the 33-year-old actress will wear the iconic red swimsuit that was once seen on Pamela Anderson and Yasmine Bleeth, the answer is - no. "I'm not a lifeguard, I'm the interruption in their slow motion," explains Priyanka - the lifeguards in this update of the hit TV series being played by Dwayne Johnson, Zac Efron, Alexandra Daddario and other actors. And another thing - the villain, which is the character Priyanka plays, was originally written for a male actor.


EXCLUSIVE FIRST LOOK: Our entire #BAYWATCH squad. Are we bad ass? Yes. Do we save lives? All day. Are we a dysfunctional family? Epically. Do we have fun? F*CK YES. We work hard, we play hard. @thejonbass @alexannadaddario @kellyrohrbach @ilfenator @zacefron #BAYWATCH Get ready world... MAY 19, 2017. (and yes, I'm the king of the #FargoStrut.. squared circle historians know what that means.. #OurBelovedMemphisTerritory woo!)

Baywatch is Priyanka's second international project - she headlines the cast of American TV show Quantico. "I've done Quantico and Baywatch on my own terms," says the actress, "Quantico is one of the most racially diverse shows around, it's amazing being the face of diversity."
As a former Miss World, Priyanka Chopra has handled fame and showbiz for decades. At home, she's a superstar; abroad, she's swiftly getting to uber-celeb status with a hosting gig at the Oscars and appearances on Jimmy Kimmel and Jimmy Fallon. "I don't think being famous in another country is different. I've been a public person since I was 17," says she.
Having said that, Priyanka does have a bone to pick with some of her buddies: "Television is a completely different beast - none of my friends in TV told me that, I'm going to kill them." You know who you are, Priyanka's TV friends, better run and hide.
Priyanka also says that Hollywood is often as misogynistic as Bollywood. "For aeons, girls have been told they are second-class citizens. Nobody will stand up for you if you don't stand up for yourselves," she says.
Priyanka Chopra recently wrapped the second season of Quantico and will head back to USA to film Baywatch.