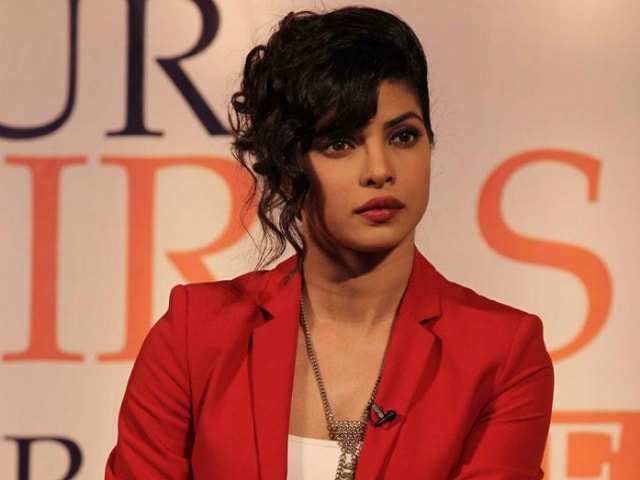 Priyanka Chopra said that the filmmaker has a right to show the "director's vision."

Priyanka Chopra told NDTV in New York that Shiv Sena's objections about historical inaccuracies in her latest film, the Sanjay Leela Bhansali directed Bajirao Mastani, are ill timed. "The book came out years ago, why weren't objections raised then? Just because this is a film with a big budget and a big cast?" said Priyanka

Priyanka Chopra told NDTV in New York that Shiv Sena's objections about historical inaccuracies in her latest film, the Sanjay Leela Bhansali directed Bajirao Mastani, are ill timed. "We live in a democracy and this is a film," the actor said, noting, "there is difference between inspired from history and based on history."
Priyanka went on to say that the film is based on a book (Rau), questioning: "The book came out years ago, why weren't objections raised then? Just because this is a film with a big budget and a big cast? If someone's sentiments are getting hurt, then they should have been hurt with the book too?"
She also told NDTV that many history books have been written about Bajiao but not about his personal life. "What happened when he ate dinner? At home? He lived a life too...", Priyanka said. Adding, she thinks the filmmaker has a right to show the "director's vision" of that, and "the things that history books don't tell you about."
When asked about her thoughts on intolerance, reflected in Aamir Khan's recent remarks in India and the repercussions of Donald Trump's 'Muslim ban' statements in America, the actor who is exposed to both worlds in her professional career, said, "Intolerance is a global problem. We are making it belong to each country, pointing fingers at public figures. Look at Paris, Lebanon, Mumbai, its a problem all over the world." She also explained, "Its people saying I don't like you because you have a different religion, you are not right because you are going to a concert, what's happened to humanity?". She said that it is disturbing to "divide each other on religion, beliefs and culture" and "we need to change our perspectives."
Priyanka Chopra's leap into mainstream American television, scoring the lead in ABC's hit series Quantico, has made her a path breaker, walking a road where no Indian actor has trodden. She told NDTV, that she has "always been someone who wanted to walk my path" and she is always happy with the result, "good, bad, ugly - as long as its mine." Priyanka said she does not have role models "except my mom."
"Fear", was the hardest part of the transition from India to the West, the 33-year-old actress told NDTV, "I read 26 scripts, questioned myself: 'Did I pick the right one? Would an Indian girl be accepted as American or lead of a mainstream US show?'" But in the end it all turned out better than she ever imagined. "The writing is amazing, ratings are through the roof, and there has been incredible response from everyone in US to India", the star said, quipping,"at the airport security is always asking me - so, who is the terrorist?," referring to the who-done-it mystery plot of Quantico and her lead Alex Parrish.
NDTV spoke with her at New York's Loews Regency Hotel, where she was promoting her film, Bajirao Mastani, on a quick trip from Montreal, where she is currently shooting ABC's hit series Quantico.
Watch: