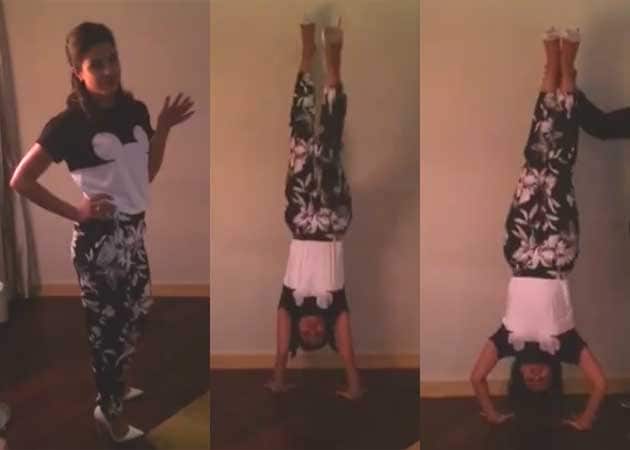 Stills from Priyanka's video of her completing Hrithik's challenge

Actress Priyanka Chopra has responded to Hrithik Roshan's Bang Bang challenge which he threw to her on Twitter.

The only girl I cud dare this! For super @priyankachopra my #bangbangdare HANDSTAND with a push up!! Do u accept! U have 3 days!

And Hrithik's Krissh co-star didn't lose anytime in replying. She accepted the challenge on September 22 afternoon and her response went live on social media shortly after some time. (Also Read: How Priyanka Accepted the Challenge)

In the video Priyanka says , " Really Hrithik? You should have made it harder."

She then proceeds to do the handstand and three pushups as per the challenge.

Once back on her feet, she retorts, "Anymore? Nothing's too difficult for Mary Kom".

Check out the video:

Hrithik, as a part of his promotions for his upcoming movie, Bang Bang which is set to release on October 2, has also issued challenges to actors Shah Rukh Khan, Dino Morea and Uday Chopra but barring Uday others are yet to respond. He also challenged celebrity photographer Daboo Ratnani earlier. To Sonam Kapoor his dare was to share her smile on the success of Khoobsurat.

Priyanka, who trained under a grueling schedule for her super hit sports biopic Mary Kom, not just finish her dare in quick time but to her credit did it wearing high heels.

@priyankachopra give it up 4super peecee guys!Unbelievable!!This one can really just about do anything! #bangbangdarehttp://t.co/iDjYpHCoUf

He then declared Priyanka the winner of the challenge ( bear in mind that Uday Chopra was the first winner). Priyanka accepted the title graciously: