Priyanka Chopra Says, 'My Success Belongs to Me, Nobody Else'

"I do have a phenomenal team because they handle two continents of my scheduling and more than anything else, they make sure that nobody gets pissed off because I am spread too thin," said Priyanka Chopra 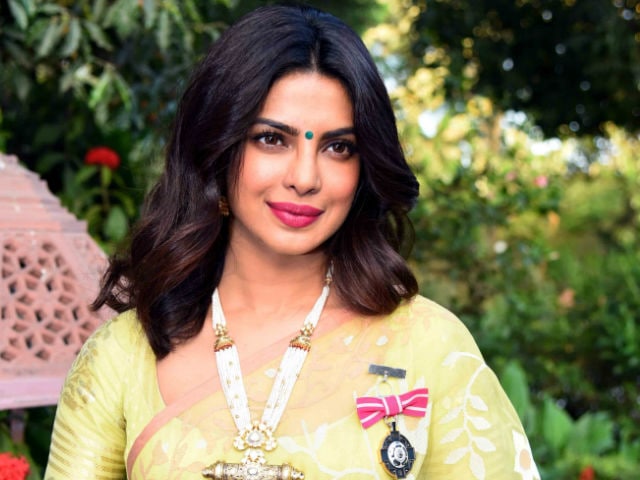 Many people believe that Priyanka Chopra owes her success to her team, but the Bollywood actress, who is now a globally recognised face due to her American television series Quantico and soon to release Hollywood film Baywatch, says that the credit for her work goes "only and solely" to her and nobody else.
"I do have a phenomenal team because they handle two continents of my scheduling and more than anything else, they make sure that nobody gets pissed off because I am spread too thin," said Priyanka, who was in New Delhi for a day to pick up her Padma Shri honour from President Pranab Mukherjee.
"Having said that I feel that I am destiny's favourite child. I have made sure that whatever opportunity comes my way, I give my heart and soul to it. So the credit of my work goes only and solely to me because I am the one who stands in front of the camera between action and cuts and nobody else does," she said, while adding that people take credit away from women who put in hard work.
"People take credit away from working girls by giving it to somebody else, saying, 'Isko toh banaya hai' (her success has been made by others), but my question is, 'Koi aur kyu nahi bana abhi tak' (Why someone else hasn't made it yet)" she said.
When asked how she reacted when her former manager alleged that she wanted to commit suicide because of stress during the initial phase of her career, the actress said: "My father used to say, 'Jab haathi chalta hai toh kutte bhonkte hai' (when an elephant moves, dogs bark)." (Also Read: Priyanka Chopra Slams Media For Giving Credibility to Prakash Jaju's Claims)
Priyanka's journey in showbiz started at the age of 17, when she was crowned Miss World. It was followed by her Bollywood debut in 2003 with The Hero: Love Story of a Spy. After that, there was no looking back as she mastered the art of delivering the unexpected.
After making India proud globally with her role of FBI agent Alex Parrish in Quantico, she signed Baywatch alongside Hollywood stars like listers Dwayne Johnson and Zac Efron.
So, with her international projects, does she feel like a newcomer abroad?
"It's a very strange dichotomy with me because even for them, they don't know how to treat me. In most places where I go or the films that I do, they know I am a big star from another part of the world. I have people waiting for me when I am shooting, but they don't know me," Priyanka said, while adding that stardom should not be "announced before you walk in", it should be a discovery. (Also Read: Does Priyanka Chopra Wear the Red Swimsuit in Baywatch? Answer Here)
"What I am enjoying is people discovering me. They are discovering and saying, 'What is the fuss around this girl, why are people standing outside to see her shooting in Montreal. Let's go and Google her and then they Google me and find out who I am'," she said.
The National Award-winning actress said that it's "fun" for her to have another part of the world discover her "without saying anything".
Priyanka, who is also the first South Asian actress to win a People's Choice Award, also feels that the definition of stardom is different in the west than in India because of fans.
"Stars are not different but the fans. It's beautiful to see how much a fan loves Indian cinema and the actors. It's so satisfying to have someone applaud your work and love you. I am just a girl but the kind of love and affection I receive, it gives me support. I don't think any other star in any part of the world will ever experience what an Indian does," she said.
Apart from Quantico and Baywatch, Priyanka recently dubbed for Kaa, the python, in the Hindi version of Disney's The Jungle Book.
In Bollywood, she was last seen in Prakash Jha's Jai Gangaajal.