After the Bharatnatyam performance at the UN headquarters, Aishwaryaa R Dhanush met Priyanka Chopra and posed for an 'amazing' picture 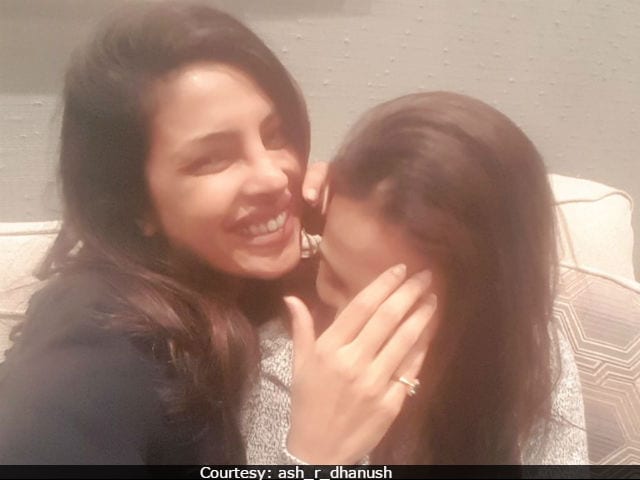 Rajinikanth's daughter Aishwaryaa R Dhanush, who performed at the United Nations headquarters in New York on International Women's Day, spent an 'amazing' evening with actress Priyanka Chopra, tweeted the 3 director. She captioned the image as: "Amazing night with the rockstar n our pride @priyankachopra.. love you ! #connection"(sic). On Karan Johar's chat show Koffee With Karan 5, Priyanka, who is busy shooting for her television series Quantico revealed that whoever from the industry comes to Los Angeles, meets her. Aishwaryaa too made sure to meet Priyanka. The Baajirao Mastani actress has a bright smile on her face while Aishwaryaa seems to be hiding her face.
Check out Aishwaryaa R. Dhanush's post here:


Amazing night with the rockstar n our pride @priyankachopra ..love you ! #connectionpic.twitter.com/Pv938CB2Fz

Priyanka too was elated to meet Aishwaryaa it seems and tweeted: "Loved seeing u."

Aishwaryaa R. Dhanush's performance at the UN received a lot of backlash. Renowned dancer Anita Ratnam, who is trained in Bharatanatyam, Kathakali and Mohiniattam, shared a snippet of Aishwaryaa's performance of Facebook and wrote: "This is what bharatanatyam becomes... A caricature and a farce! (sic)"

Aishwaryaa, trained in Bharatanatyam, is the UN Goodwill Ambassador for Women to promote gender equality in India.
Meanwhile, Priyanka Chopra, who've lost to Hollywood is currently seen in Quantico Season 2. The 34-year-old actress is also prepping for her Hollywood debut opposite Dwayne 'The Rock' Johnson in Baywatch. Priyanka will play Victoria Leed, the prime antagonist. She was last seen in Jai Gangaajal and has also produced a Punjabi film Sarvann. Priyanka also made an appearance at the Oscars this year.