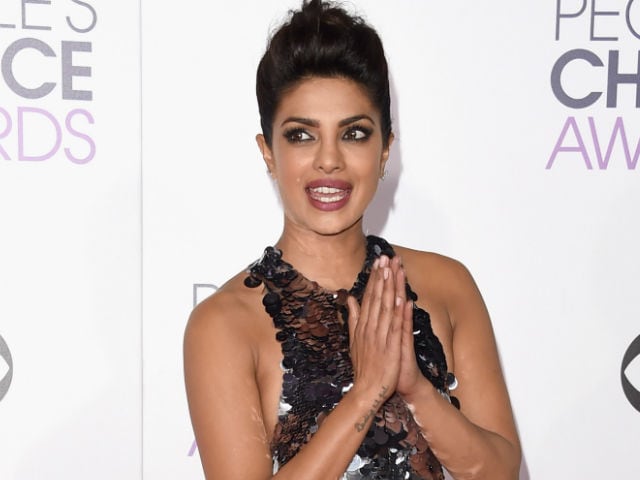 "What a fabulous January to begin my year with. I'm the daughter of an Army officer. So, the feeling of receiving this civilian award is extremely special," said Priyanka Chopra. The actress is currently in Montreal, where she is shooting for her television series Quantico

Priyanka Chopra will receive the Padma Shri, India's fourth highest civilian honour. The actress, who is currently shooting for her television series Quantico in Montreal, said that the feeling of receiving the Padma Shri is extremely special.
"What a fabulous January to begin my year with," Priyanka told IANS in a telephonic interview from Montreal, where she is shooting for Quantico.
"I'm the daughter of an Army officer. So, the feeling of receiving this civilian award is extremely special," she added.
Her father, Lieutenant Colonel Ashok Chopra was a doctor. He retired from the Indian Army in 1997. Although Priyanka missed her father, she was glad that her mother Madhu Chopra woke her up with the news of the Padma Shri in Montreal.
"I am so happy. My mother woke me up with this wonderful news. We've had a little celebration here," said the National Award-winning actress, adding that her mother had joined her in Montreal earlier this month, ahead of the People's Choice Awards where Priyanka became the first South Asian actress to win the award.
The actress also tweeted that she felt privileged to be a part of the 'illustrious list of achievers':

My congratulations to the recipients of the Padma Awards this year. I am privileged to be a part of such an illustrious list of achievers.

What a January.. And now to get the PadmaShri!!!!! I can't even contain my excitement.Being the daughter of army officers this is so special

Priyanka won the Favourite Actress in a New TV Series Award for Quantico recently. When she was asked what sets the Padma Shri honour apart from the other awards which she has won, she said: "It's the Padma Shri, man. It's shocking."
Priyanka has featured in films like Andaaz, Aitraaz, Krrish, Fashion, Mary Kom, Barfi! and Bajirao Mastani. (Also Read: Madhur Bhandarkar to Receive Padma Shri, Tweets He is 'Grateful')
However, Priyanka said that she is busy with work and that is how she will celebrate.
"No. I have to get back to work. That's how I will celebrate. I'll work," added Priyanka.
Priyanka will soon be seen in Prakash Jha's Jai Gangaajal, which is scheduled to release on March 4.