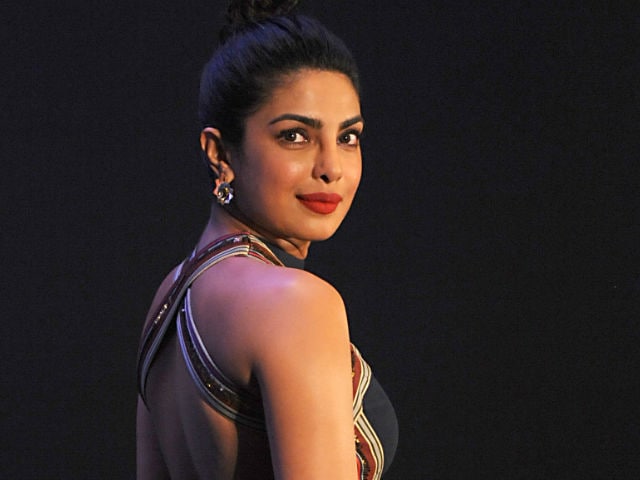 Actress Priyanka Chopra is not making any compromises in swapping Bollywood for Hollywood.
The former Miss World, who has won an army of fans in the US since taking the lead in the American spy thriller television series Quantico last year, refuses to be stereotyped by her beauty or her origins.
"I didn't want to do a show that would stereotype me or put Indian people into a box. I'm a leading actress in India and I wanted to make sure I was a leading actress in whatever I did," she said.

"I would not compromise on that," said the star of the ABC show in which she plays an FBI agent, who is given a chance to work for the CIA at the end of season 1.
Proud to call herself a "strong-willed feminist", the 34-year-old actress is determined to build her career and still "have lots of babies. But there is nothing under way on that," she told AFP in Paris on a visit to promote Quantico, whose second series begins in September.
"I've still to find the right guy. That's important," she laughed.
Like her character in Quantico, Alex Parrish, who has to go into hiding to clear her name, Priyanka sticks to her guns.
She has turned down roles in Britain because she was "always asked to play the stereotype of an Indian."
The spy show's international success is changing all that.

That has been such a hit may have surprised some but Priyanka - the first South Asian to headline a US network series - said its backstory of people with secrets is universal.
"This show talks about people with secrets and everyone has secrets. Terrorism is a huge part of our reality whether you like it or not," she said.
"It is the most cowardly way of instilling fear to make people understand someone's belief," she said.
Feminist principles
But jumping to conclusions about terrorism was equally dangerous, she said. "In America it is easy to frame a brown girl" like Alex, she added.
Priyanka's ability to carry such a complex character has opened other more meaty roles, with the actress playing the baddie in the new Baywatch film due for release in May.
"I make the good guys' lives miserable," he said with some relish.

Having campaigned to close the gender pay gap in Bollywood, she credits her mother, a doctor who served in the Indian army, for helping forge her feminist principles.
"She raised me to be the kind of girl who thinks, who has opinions too. For so many years women were told to act a certain way, to dress a certain way, to think a certain way, even not to think at all. People misconstrue the word feminism. It is not hating men, or making men small. It is just saying, 'We want our independence to make our own choices the way men have done for so long'," she said.
Nor did it stop her having the phrase "Daddy's lil girl" tattooed on her wrist after her father, who was also an army doctor, died three years ago. "It is in his handwriting," she said.

Born in Jamshedpur in Bihar in northeast India, Priyanka has already more than 50 films to her name and is proud of how Bollywood films "are now being seen worldwide."
And she has absolutely no intention to turn her back on her homeland despite her US success. She works there as a UNICEF ambassador and for the UN's Girls Up campaign, and her own foundation run by her mother supports underprivileged girls across India.
"Philanthropy is not something to do because I'm a famous person, but because I was raised like that" with a strong spirit of public service, she insisted.
(Except for the headline, this story has not been edited by NDTV staff and is published from a syndicated feed.)