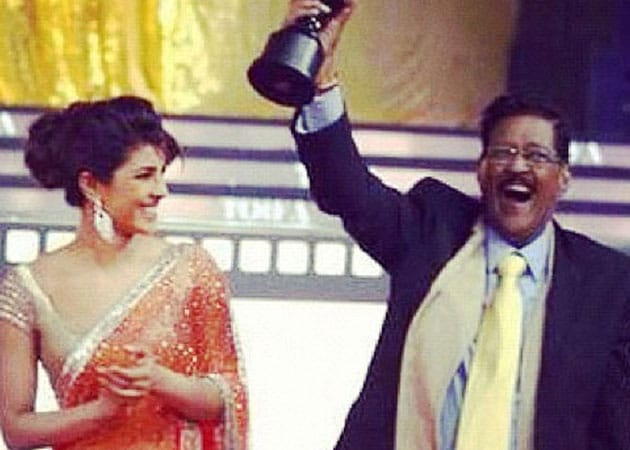 Priyanka Chopra with her father at the TOIFA awards in Vancouver. File picture

Actress Priyanka Chopra has finally bid farewell to her father Ashok Chopra who died in Mumbai's Kokilaben Dhirubhai Ambani Hospital today. Mr Chopra had long been a cancer patient and was admitted to hospital just days ago in critical condition.
Mr Chopra was first diagnosed with cancer in 2005, when Priyanka was working on Bluffmaster. He had been in and out of hospital ever since. Earlier this year, he and wife Madhu Chopra accompanied Priyanka to the TOIFA Awards held in Vancouver, Canada.
Priyanka has reportedly put her projects on hold, including the biopic of boxer Mary Kom.
The actress was famously very close to her father and often paid him tribute in interviews. She wore her heart on her sleeve with a tattoo on her wrist that read "Daddy's Li'l Girl," a phrase she also used to describe herself on her Twitter account.
She also spoke about her father when she began her second career as a singer, calling it her "dad's dream." When her first single In My City was released, Priyanka said, "My dad was not all that happy when I became an actor and won national awards, like he is today."
Ashok Chopra had been a doctor with the Indian Army and the family travelled around India on military postings while Priyanka was growing up.
Priyanka's friends and colleagues from Bollywood have paid their last respects to her father on Twitter.
Bipasha Basu: Strength to u @priyankachopra n ur family.
Neha Dhupia: So so sad to hear about your loss @priyankachopra ... Condolences to u and your family. Sending u tons of love n energy to get past this.
Genelia D'souza: Deepest and Heartfelt condolences 2 dear @priyankachopra, your mom n ur fly.. All the strength 2u
FarhanAkhtarFC: Deepest condolences to u @priyankachopra . Strength, love and support to you.