Sindhu, I Am Your Fan, Tweets Rajinikanth. Over 18,000 Retweets And Counting

The 21-year-old sportsperson won the silver medal after she lot the final against World No. 1 Carolina Marin. Rajinikanth and Bollywood applauded the player's spirit on Twitter 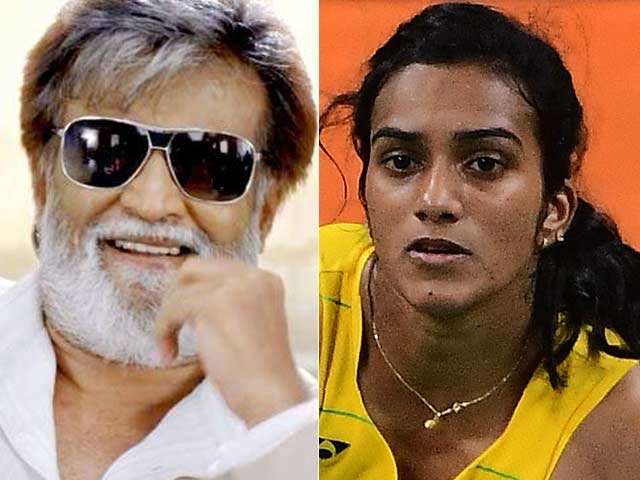 India's collective heart is full after badminton star PV Sindhu won the silver medal in the women's singles match at the Rio Olympics. In a bravely-fought thriller of a match, Sindhu lost to Spain's Carolina Marin. At home, stars like Rajinikanth and Amitabh Bachchan were watching and saluted the 21-year-old on Twitter.
Rajinikanth, who rarely tweets, declared himself a fan of the young player. His tweet had been retweeted over 18,000 times. Big B, who has been following the Rio Games closely, thanked Sindhu for bringing India glory.


Hats off to you #PVSindhu .... I have become a great fan of yours ... Congratulations !


Saw d finals on tv with my mom and told her I hv a picture with Sindhu . Proud . pic.twitter.com/Ka9JHvnsjT

Every cloud has a silver lining indeed! First Olympic silver in Badminton for India! Thank you @Pvsindhu1 Huge respect #Rio2016

I was on the edge of my seat. What a game & what an athlete. PV Sindhu! You have won our hearts. #proudpic.twitter.com/OuKkvbATrc

#girlpower all the way!!! @DipaKarmakar, @SakshiMalik and @Pvsindhu1 ...You made us SO proud!!!

#PVSindhu has brought so much happiness to an entire country. Hard work and determination always pays off so much to learn from her

Proud of #PVSindhu for winning us the Silver.More power to you Respect! #RioOlympics2016

Other congratulatory messages were posted by Akshay Kumar, Twinkle Khanna, Dhanush, A R Rahman, Farhan Akhtar and others.


She played magnificently and made India proud #PVSindhu#GirlCrush

Sindhu :) what a champion. #fighter history made. This is just the beginning. The nation loves you. We are all so proud of you

Congratulations #PVSindhu .. so happy for you and your corner.. this silver medal is just the beginning.. Shine On!! #Olympics2016

Congratulations PV Sindhu! You're our champ,no matter what! You gave everything you had,you star! You're our SILVER LINING!

You played like a champion @Pvsindhu1 and gave it your all!! You didn't just win the silver, you won our hearts #RioOlympics2016

You represented india at the highest level. Played the game of ur best calibre. She's rank 1 & you fought like an equal. @Pvsindhu1#Rio2016