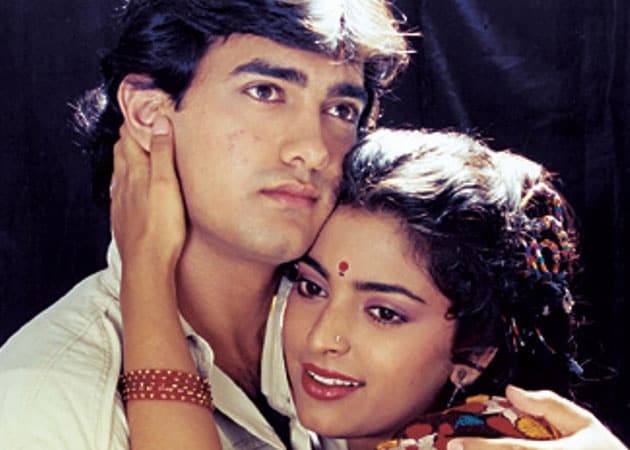 Qayamat Se Qayamat, a desi Romeo and Juliet tale of love and revenge starred Aamir Khan - son of Tahir Hussain - and was directed by Mansoor Khan - son of Nasir Hussain. The film also starred Juhi Chawla, starting out as an actress after winning the Miss India pageant.

25 years ago, on April 23, 1988, a film called Qayamat Se Qayamat Tak revived the fading fortunes of Nasir and Tahir Hussain, producer-director brothers who had been behind hits such as Yaadon Ki Baraat, Teesri Manzil and Caravan but whose best times were past. Qayamat Se Qayamat, a desi Romeo and Juliet tale of love and revenge starred Aamir Khan - son of Tahir Hussain - and was directed by Mansoor Khan - son of Nasir Hussain. The film also starred Juhi Chawla, starting out as an actress after winning the Miss India pageant.
Qayamat Se Qayamat Tak was an instant blockbuster, propelling it's young hero to matinee idol status overnight. All of 23, a fresh-faced Aamir had a million female fans swooning as he crooned Papa Kehte Hain, strumming a guitar. The same female fans were left with shattered hearts when they discovered later that the girl Aamir sings aankhon mein jaadu, hothon mein pyaar to was his real-life wife, Reena.
Aamir and Juhi played Raj and Rashmi, who fall for each other after chance meetings at her birthday party and then on holiday. However, their families are at war, and Rashmi's father arranges to get her married when he discovers the affair. Undeterred, Raj and Rashmi elope and set up home in a deserted fort. A short spell of marital bliss is soon destroyed by Rashmi's father, who hires a contract killer. Rashmi's grandmother goes to Raj's family for help. It all ends in the forest near Raj and Rashmi's home. The contract killer shoots Rashmi, instead of Raj, who then stabs himself.
The cast of the film featured a galaxy of popular actors from the Eighties. Dalip Tahil and Goga Kapoor played the feuding fathers of the young lovers, a young Raj Zutshi made the first of many appearances with Aamir Khan, Reema Lagoo and Alok Nath appeared as members of Raj's family. Aamir Khan's nephew Imran made an appearance as the young Raj.
When the film became a hit, Mumbai distributors decided to cash in by offering a free poster of Aamir and Juhi for eight or more tickets bought. The gimmick worked, boosting ticket sales even further.
Qayamat Se Qayamat Tak also started the trend of having films referred to by an acronym of the title. QSQT led to DDLJ (Dilwale Dulhaniya Le Jayenge), HAHK (Hum Aapke Hai Kaun) and the like.
Qayamat Se Qayamat Tak swept the Filmfare awards, winning - among other awards - Best Male Debut for Aamir Khan, Best New Face for Juhi Chawla, Best Director for Mansoor Khan and Best Film.