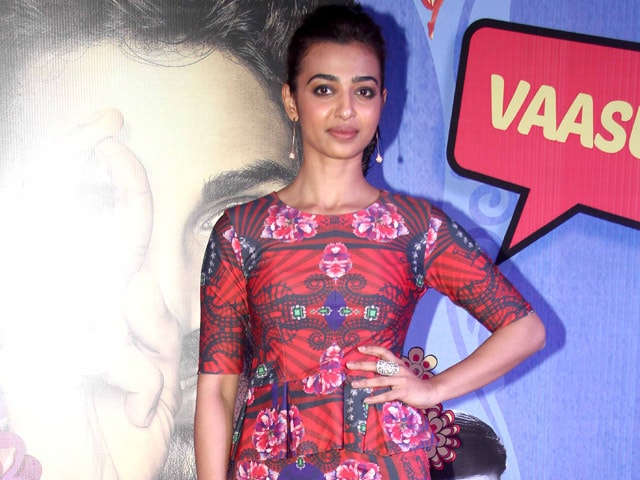 "I don't care what the language of the cinema is, as long as it has a connect with real life," says the actress

"We shot Hunterrr over a long period of time. We did a major part of the shooting and then stopped. We picked up the threads again after two years, completed the film and quickly released it. Fortunately, the time lapse doesn't show in the film."

For an actress who has worked in films in seven languages even before turning 30, Radhika has a hunger to excel in unexpected roles.

"I cannot see myself just looking pretty and dancing. I am sure that requires a helluva lot of discipline and hard work. But I'd rather channelise my energy to do something different, like I did in Badlapur and Hunterrr."

In Hunterrr, Radhika played a character with a past.

"We are living during times when women are not expected to be 'sati savitris'. My character in Hunterrr had a relationship and an abortion. This is a relatable person. I don't know any friend of mine who hasn't had sex before marriage."

And now the quest for real characters continues.

"I don't care what the language of the cinema is, as long as it has a connect with real life. I am doing Leena Yadav's Parched where I am pitched against some really brilliant actresses in a story that's set in Rajasthan. And I am doing The Field about the Delhi mafia where my co-star is Neeraj Kabi (the monk in Ship Of Theseus).

"Then there is the biopic on Dashrath Manjhi with Nawazuddin Siddiqui which Ketan Mehta has directed. I got to play a Bihari rustic woman for the first time. I am also doing a couple of short films, one directed by Pia Sukanya called Bombairiya, and another one co-starring Soumita Chatterjee directed by Sujoy Ghosh.

"Then there is a short film by Anurag Kashyap on forbidden love."

Radhika who is married to a British musician, is very clear in her views on nudity in cinema.

"I have done a nude scene for an English-language film. In fact, I wrote an article about how strongly I felt on the subject of nudity. At the same time, I wouldn't allow my personal space to be violated by any intrusive attention.

"Sometime ago, someone had posted a nude selfie on the internet claiming it was me. The girl didn't even look like me. And the controversy died a natural death."

Radhika, says "I am here because I am passionate about acting. Just after I was noticed in Raj Nidimoru-Krishna DK's Shor In The City, I left for London to study contemporary dancing. I came back feeling more empowered.

"I grew up idolising Aamir Khan. I had a poster of his in my room. Every day I said 'bye' to it before going to school. I want to create a similar sense of self-worth in my career," she said.