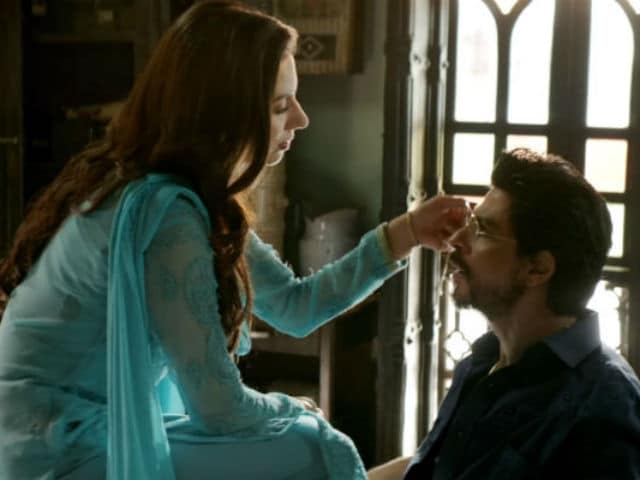 Superstar Shah Rukh Khan is determined to give a happy start to the New Year for his fans, eagerly awaiting the release of his twice rescheduled film Raees. The 51-year-old actor shared two posters from his film Raees, which will hit the screens later this month. The first poster he shared on Monday also featured his co-star, Pakistani actress Mahira Khan along with a dialogue: "Tu shama hai toh yaad rakhna... Main bhi hoon parwana." In the poster, Shah Rukh is bruised and bleeding while Mahira, who is holding hands with SRK, looks grieved.

Last month, Shah Rukh Khan met MNS chief Raj Thackeray at his Mumbai residence to clarify that Mahira will not be part of Raees promotions in India. The MNS in the past objected to casting of Pakistani actors in Indian movies after the Uri attacks. After the meeting, Raj Thackeray told news agency ANI: "He (Shah Rukh Khan) had come to inform that rumours about Mahira Khan promoting Raees are false."

MNS also called for a ban on director Karan Johar's Ae Dil Hai Mushkil, objecting to the presence of Pakistani star Fawad Khan. The film released as per schedule with help from Maharashtra chief minister Devendra Fadnavis, but Fawad's part in the film was cropped and his character was underplayed during the film's promotion.
Meanwhile, Mahira is super excited about her Bollywood debut film and is promoting the film in her country in a unique style:

In the next poster of Raees, Shah Rukh features alone with the caption: "O Zalima"

The first trailer of Raaes released in November and was an instant hit. The trailer git more than 12 million views in less than 25 hours. Soon after the trailer, Sunny Leone's special dance sequence Laila Main Laila, a rendition of Zeenat Aman's 1980 song Laila O Laila, enthralled fans.
Raees, now releasing on January 25, a day before Republic Day, was rescheduled twice to avoid clash, first with Salman Khan's Sultan and then with Karan Johar's Ae Dil Hai Mushkil. The Rahul Dholakia-film however will still open alongside Hrithik Roshan's Kaabil.