Nawazuddin said: "I enjoyed working with (Shah Rukh Khan) a lot because he works like an actor on set. In addition, that reflected on our performance as we have some crucial scenes in the film. He does not carry his stardom on set. He is very humble" 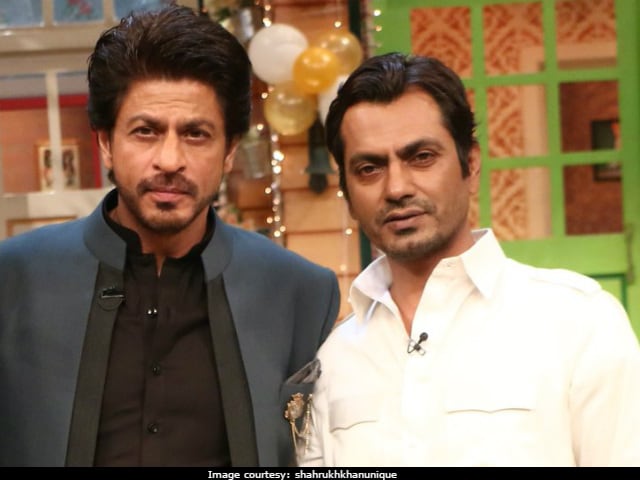 Actor Nawazuddin Siddiqui is constantly asked what it's like working with the Khans. He is uniquely positioned to answer - the 42-year-old actor has co-starred with all three Khans - Shah Rukh, Salman and Aamir - and is now cast opposite them in roles that give him a share of screen time second only to the hero. Nawazuddin plays a crucial part in Shah Rukh Khan's upcoming film Raees and he told news agency IANS that on set, SRK is an actor and not a star. Raees stars SRK, 51, as a boot-legger in Gujarat. Nawazuddin is cast as Inspector Jaideep Majumdar, the cop charged with bringing Raees Alam down.
"I enjoyed working with (Shah Rukh Khan) a lot because he works like an actor on set. In addition, that reflected on our performance as we have some crucial scenes in the film. He does not carry his stardom on set. He is very humble," Nawazuddin told IANS.
It might seem like no major film is made in Bollywood now without Nawazuddin Siddiqui in it but the actor spent his early years languishing in bit parts and obscure roles. Most famously, he appeared in the song Emotional Atyachaar in Anurag Kashyap's Dev D but his really began his career way back in 1999 opposite Aamir Khan in Sarfarosh. He also appeared in 2010 film Peepli Live, produced by the actor. Decades later, he co-starred with Aamir again in 2012's Talaash, one of Nawazuddin's breakthrough films. With Salman Khan, he made 2014's Kick and 2015 blockbuster Bajrangi Bhaijaan.
"I have worked with all the Khans, whether with Aamir ji in Talaash, Salman bhai in Kick, and Shah Rukh sahab in Raees. All of them have different styles and I had a great time working with them," Nawazuddin Siddiqui told IANS.
Nawazuddin is circumspect when asked about those early, seemingly interminable years of struggle. "See, my aim was not to get a huge role in every film. I just wanted to act in films," he told IANS.
"I did not get depressed thinking why am I not getting the role of a hero, but just one scene. I did not have any high expectations, but the wish to continue my journey as an actor. I am thankful to Bollywood that finally they are giving me some good roles. Having said that, I must say that there are so many talented actors here and they also deserve equal opportunity," Nawazuddin said.
Raees, easily one of this year's most-anticipated films, is directed by Rahul Dholakia and co-stars Pakistani actress Mahira Khan. It releases on January 25.
(With inputs from IANS)