Rajinikanth Inspired Dhanush's Mannerisms But Shamitabh is 'Not His Story' 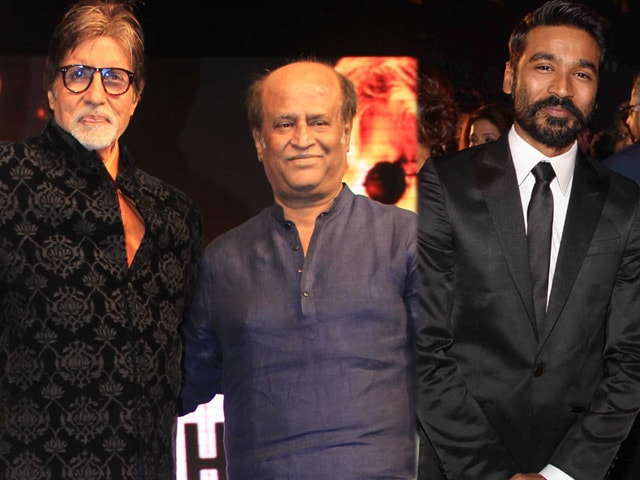 Amitabh Bachchan, Rajinikanth and Dhanush at the music launch of Shamitabh

Dhanush's character is believed to be based on his famous father-in-law. He says it isn't

R Balki's upcoming film Shamitabh is studded with stars like Amitabh Bachchan and Dhanush - and, some say Rajinikanth as well. Dhanush, however, says that his character is not based on his superstar father-in-law, though there is a whiff of Rajini about his mannerisms.
"The story is not his story. There is nothing to do with him, but I drew little inspiration here and there from him, his mannerism, etc. After release I can tell you where and why specifically," Dhanush told NDTV on the sidelines of the music launch of Shamitabh in Mumbai on January 21.
Dhanush is believed to be playing a speech-challenged actor who uses Big B's deep and intense voice as his own, as shown in the second trailer.
On the subject of famous family members, debutante Akshara Haasan was asked if she shares her sister's musical talent - actress Shruti Haasan sings playback, has composed a soundtrack and written film lyrics. Akshara said, "No, not at all. I'm a terrible singer." She added, "I wish I could sing but when I sing I go really off tune."
Akshara is the younger daughter of actors Kamal Haasan and Sarika. Her sister Shruti is a an established actress down South and has appeared in a handful of Bollywood films.
Dhanush, who co-starred with Shruti in 3, has also been in the recording studio. 2011 chartbuster Kolaveri D made Dhanush an accidental vocalist. But the Raanjhanaa actor is clear that he doesn't want to explore a career in music any further. "I'm not a professional singer. That song (Kolaveri D) was an accident. It could have happened to anybody and I'm thankful to God it happened to me. There is nothing special in that song, but sometimes things just click. I don't mind singing but right now I'm focused on February 6 (when Shamitabh releases)," Dhanush said.
Meanwhile, Rajinikanth's Lingaa has received a lukewarm response. Dhanush said, "A king is a king. He (Rajinikanth) always was and will be. Nothing has changed."
Watch: