Sachin: A Billion Dreams is a biographical documentary film which features Sachin, his wife Anjali and son Arjun 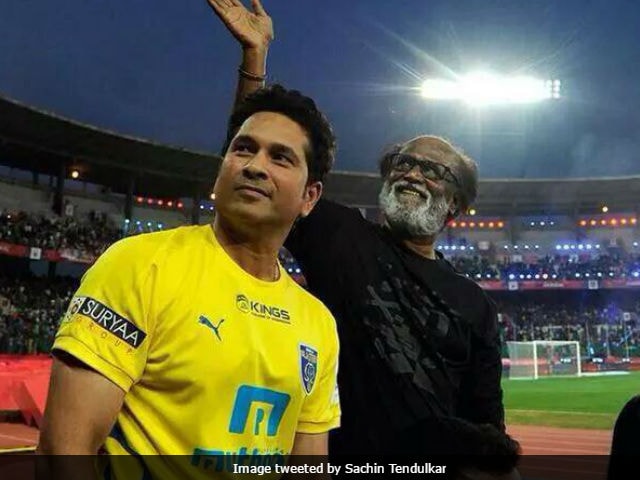 Superstar Rajinikanth gave his best wishes to cricketer Sachin Tendulkar's upcoming biopic Sachin: A Billion Dreams. On Wednesday, the Kabali actor tweeted: "Dear @sachin_rt , my best wishes for the success of 'Sachin ... a billion dreams'. God bless. (sic)" Sachin released the trailer of his film recently and it was an instant success. Sachin, replying to Rajinikanth's tweet, shared the trailer of his film in Tamil and wrote: "Thank you Thalaiva. Hope you enjoy this in Tamil. (sic)" The film is directed by Emmy-nominated filmmaker James Erskine and it featured Sachin Tendulkar along with his wife Anjali Tendulkar and former colleague Mahendra Singh Dhoni.


Dear @sachin_rt , my best wishes for the success of 'Sachin ... a billion dreams'. God bless.

Thank you Thalaiva. Hope you enjoy this in Tamil. @superstarrajini#TamilTrailerhttps://t.co/eeUpqIA8mWhttps://t.co/x75DK1LpmJ

Apart from Hindi and Tamil, Sachin: A Billion Dreams will also release in Marathi. Producer Ravi Bhagchandka told Mid-Day: "Before we started shooting the film, we decided it would be a great idea if the film was made in Sachin's mother tongue, lending a local flavour to the film." Sachin Tendulkar also recorded a song for the film with singer Sonu Nigam. He unveiled the song Cricket Wali Beat earlier in April. The film will hit the screens on May 26.
Sachin Tendulkar retired from all forms of cricket in 2013 and he currently mentors Indian Premier League team Mumbai Indians.