"Even I didn't know that. We are small filmmakers, I saw that Rajinikanthji's film stole the poster of our film. You see his film's poster and see our film's poster. No big deal about it. Watch his film and watch our film, too," says Irrfan 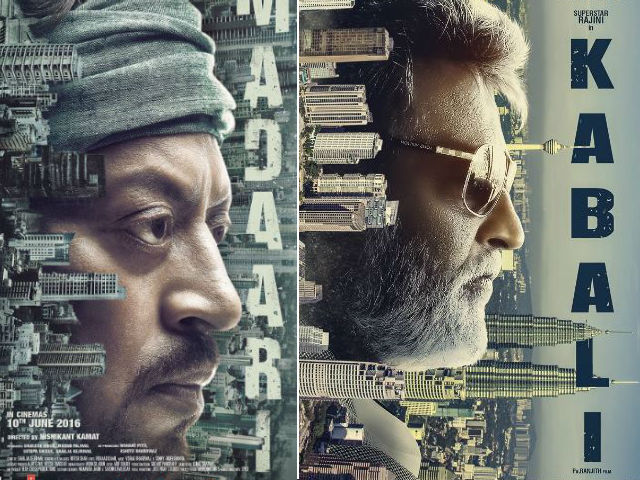 A poster of Madaari and a Kabali fan-made poster

Actor Irrfan Khan says superstar Rajinikanth's film Kabali has stolen the poster of his upcoming film Madaari but said it was no big deal and urged fans to go for both films.
When asked about the similarity between the films' posters, Irrfan said: "Even I didn't know that. We are small filmmakers, I saw that Rajinikanthji's film stole the poster of our film. You see his film's poster and see our film's poster. No big deal about it. Watch his film and watch our film, too."
Both the posters see the faces of the lead actors, Irrfan Khan and Rajinikanth, with numerous buildings and skyscrapers standing horizontally on their faces.
Though the Madaari poster is mentioned as its official poster, fans of Rajinikanth have clarified, on a website talking about the comparison, that the Kabali poster in question is a fan-made one and not the official poster.
There are numerous posters of Kabali doing the rounds on social media. Rajiniknath had shared two posters on his Twitter account in September last year, when the shooting had begun.

But among the recent ones, the one with Rajiniknath, Radhika Apte and Wilson Choa, one in which he is staring at a gun in his hand, one where he is sitting on a sofa and one showing him with sunglasses in side profile, have been the popular ones.

Of Madaari, Irrfan said: "The film is a thriller, the film is talking about you. It is talking about 150 crore people, that there is a hero in every person and when that person wakes up then no one can face that person."
Of the experience of working with director Nishikant Kamat, he said: "It felt very good. Nishinkant Kamat had made a film Drishyam, before that he made Force and before that he had made Mumbai Meri Jaan, and we had worked together on that film. We got the opportunity to work again in this film. The film is a solid thriller, you will enjoy it. There is a message in it. People will take their message on their own."
Madaari releases on July 15.
(Except for the headline, this story has not been edited by NDTV staff and is published from a syndicated feed.)