Rajkumar Santoshi: Didn't know Andaz Apna Apna would be such a laugh riot 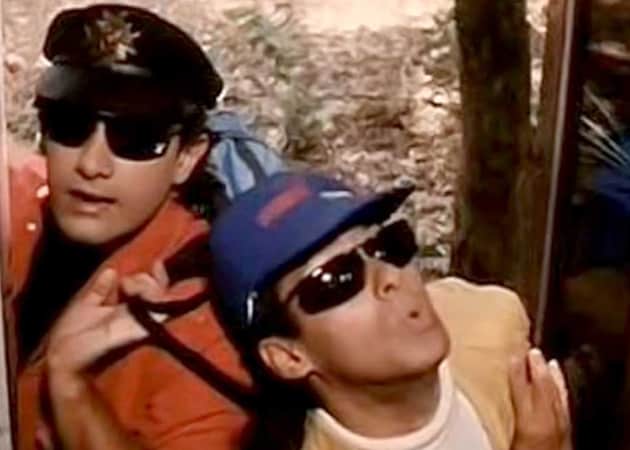 It's been 20 years since Rajkumar Santoshi's Andaz Apna Apna hit the screens, and the director says the movie's reach, appeal and impact have been way beyond expected.

It's been 20 years since Rajkumar Santoshi's Andaz Apna Apna hit the screens, and the director says the movie's reach, appeal and impact have been way beyond expected.
"Has that film really completed 20 years? Wow! It's reach, appeal and impact have been beyond anything I ever expected," Santoshi said.
The film, starring Aamir Khan, Salman Khan, Karisma Kapoor, Raveena Tandon and Shakti Kapoor, didn't fare well when it released. But it's funny one-liners, entertaining drama and melodious songs, have managed to add to its list of fans over the years.
"I still remember when the producer, Vinay Sinha, had come to me with the idea of doing a film with Aamir Khan. Vinay-ji used to look after Aamir's work. He convinced me to do film with him through my stomach. I remember he had brought the most delicious food for me.
"He suggested we do something different with Aamir. I had just done two back-to-back serious films Ghayal and Damini. We decided, why not a comedy? Little did we know that the movie would turn out to be such a laugh riot during shooting and after release," Santoshi said.
It was decided that Santoshi would script a laughathon about two warring buddies, human avatars of Tom & Jerry. After Aamir came on board, Santoshi brought Salman into the picture.
"Both were very big stars by then. They had no problems working together. And during the shooting, they became even better friends. There would be constant laughter on the sets. We would be rolling with laughter on the sets. There was so much laughter that the cameraman would be shaking with mirth while shooting the scenes.
"The camera would shake along with the cameraman. We had to stop the shooting and let the laughter subside," he recounted.
He says all the jokes and gags were worked out beforehand.
"People think Aamir and Salman decided to call themselves Amar and Prem to celebrate the movie 'Amar Prem'. But their names had nothing to do with Shakti Samanta's film. And Aamir's exclamation 'Aila!' and Salman's 'Oui Maa!' were also my idea," said the director.
He says he used to give cues to the actors from behind the camera.
"Even during that sequence where Salman is fed julaab (laxative) and his love-confessions are repeatedly interrupted by his rumbling stomach, that 'gud-gud-gud' sound to Salman's dialogues was being given by me from behind the camera.
"Salman didn't know when and where the 'gud-gud-gud' would be put by me. That added to the scene's unpredictability," he said.
Curiously, Andaz Apna Apna got a lukewarm response from the audience when it released April 11, 1994.
"It was very badly marketed and distributed. Nobody knew the film was coming. We got a below-average opening. But over the years, the film has acquired a cult status. People remember each and every dialogue of the movie, just as they remember every dialogue of 'Mughal-e-Azam' and 'Sholay'," he said.
Now Santoshi plans a sequel to Andaz Apna Apna, but strictly by public demand.
"I don't believe in creating a franchise by doing sequels or building my own brand. But the demand for a sequel to Andaz Apna Apna is unbelievable. If I don't do it someone else will. That I won't allow. I've ideas for two sequels. One of them is about Amar and Prem married and their life thereafter," he said.
However, it is unlikely that the sequel to Andaz Apna Apna would bring Aamir and Salman together again.
"Firstly, the economic logistics of bringing Aamir and Salman together in the same film are mindboggling. Secondly, their working methods are very different, even though they're such good friends in real life," he said.
So, Santoshi wants to make Andaz Apna Apna Part 2 with younger actors.
"The world has moved on in 20 years. I see a lot of filmmakers and actors doing an Andaz Apna Apna. I would like to see where the characters have gone after so long," he added.