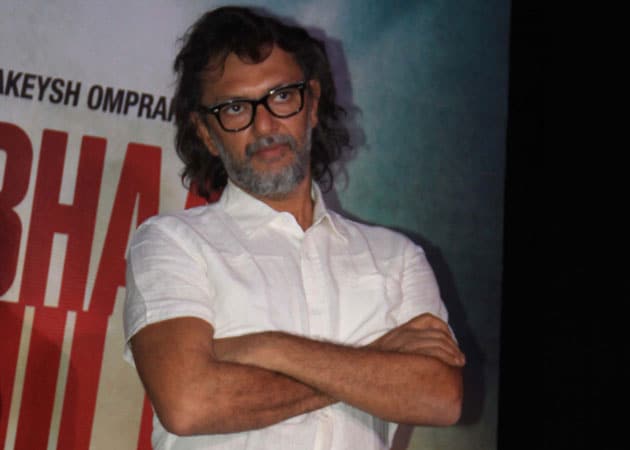 Rakeysh Mehra says his upcoming film is a tragic love story and is not a typical Bollywood film.

After winning accolades for Bhaag Milkha Bhaag, Rakeysh Omprakash Mehra knows "it's time to move on" to embark on another difficult film Mirza Sahibaan.

After winning accolades for Bhaag Milkha Bhaag, Rakeysh Omprakash Mehra knows "it's time to move on" to embark on another difficult film Mirza Sahibaan. He says the movie, a tragic love story, isn't a typical Bollywood film about a boy and girl.
In an interview, Rakeysh Mehra spoke about the new movie, his experience with the newcomers Harshvardhan Kapoor and Saiyami Kher that the film will launch, and about working with the inimitable writer Gulzar. (Also read: Good Movies Deserve the "Slow Cooking" Treatment: Rakeysh Omprakash Mehra )
QuesMirza Sahibaan is your first foray into unalloyed love. What does love mean to you?
Ans Love is quite illogical. We try to find reason for it. And fail. Love doesn't mean trying to figure out all the equations formulas and theorems of love. As for what love means to me, I will discover that as I direct the film. I know it would be one of the most beautiful experiences of my life. My film is not a boy-girl thing. It's about soul mates. I won't try to figure it out. I'll just experience it.
QuesUnlike other classic love stories, Mirza Sahibaan has not been done too often on screen?
Ans It's very interesting that you point this out. When I embarked on this journey, I wasn't the least concerned about how many times the story had been done. This was just something I needed to do. It's a tragic love story. But the way it plays out is so unique. See, usually classic love stories are based on the premise of societal opposition. In Mirza Sahibaan, the dynamics and complexities of the love relationship are defined by the couple itself. That's what made this love story so contemporary for me.
In today's world, love is not a taboo. It's something parents and society accept. Here, the boy and the girl share a very dynamic equation. They keep interchanging between the lover and the loved one. There is unconditional surrender in this relationship, a kind of Sufiyana touch that fascinated me.
Ques How have you contemporized the love story?
A. It's set in modern times, 2015 India. The legend of Mirza Sahibaan echoes across the centuries. That's how it plays out. Once I was certain of the time zone, I decided on where I wanted the legend to be located. We decided on Rajasthan.
Ques The desertscape lends itself to immense romance.
Ans True. But why do we only think of the desert when we think of Rajasthan? The Rajasthan that I want to explore is the very modern touristic hub. That is the Rajasthan I'm looking it, and not the deserts, the ghagras and the Sarangi. It's set in the heart of Rajasthan.
Ques Your Mirza and Sahibaan are played by two newcomers.
Ans Yes, Harshvardhan Kapoor and Saiyami Kher are my Mirza and Sahibaan. They play two youngsters brought up and educated in England, now back in India. They play the gen-now in the legend at a turning point in the story, Sahibaan breaks the arrows and that matters to Mirza the most. We'll explore the legend through these very talented newcomers. It would be new challenge for me to direct newcomers. They don't have to compete with other youngsters. They've to compete with themselves.
Both my leads are living out their characters. Their journey has started at Point 0. The same point where I start every film. This is what I learnt from Amitabh Bachchan and A.R. Rahman. With each project, they're starting again. (Also read: USA is the biggest overseas market for Indian cinema: Rakeysh Omprakash Mehra )
Ques Harshvardhan and Saiyami must be setting aside their contemporary lifestyles to get into character.
Ans My film is set in contemporary times, though we are showcasing the classic ancient era for 20 to 35 minutes of the film. We're creating modern folklore through music. I always felt legendary love stories should be interpreted through songs.
Ques What do you hope to achieve in this adaptation of the original love classic?
A. I'm really enjoying the process of putting the project together. Its soul, its essence. The fragrance of the flower, the nectar you can see how poetic I am becoming in Gulzar sahab's company.
Ques How is it working with him?
Ans He's such a complete artiste. Here's a true writer who can see pictures. When he writes, he paints pictures.