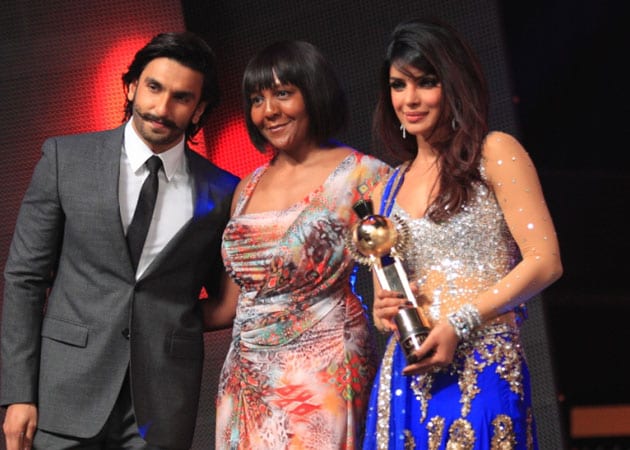 After triumphing on home turf, Anurag Basu's Barfi! made it big in foreign shores by winning the best film award at the first edition of the South Africa India Film and Television Awards (SAIFTA).

After triumphing on home turf, Anurag Basu's Barfi! made it big in foreign shores by winning the best film award at the first edition of the South Africa India Film and Television Awards (SAIFTA), while Ranbir Kapoor and Priyanka Chopra won the best actors awards for their performance in the same movie.
Ranbir was lauded for his hearing and speech impaired act, while Priyanka won the award for her outstanding work as an autistic girl.
The award show kicked off with a special Madiba Award for ailing former South African president Nelson Mandela, which was received by his granddaughter Ndileka Mandela at the gala event, which took place here on Friday (September 7, 2013).
Another special honour was given to John Abraham - the Bollywood actor-producer, currently basking in the success of Madras Cafe. He won the Best Youth Icon: South Africa honour.
Organised at the International Convention Centre, counted among one of the world's best convention centres, the extravaganza saw Abhishek Kapoor walk away with the best director award for Kai Po Che.
In the debut category, Huma Qureshi and Siddharth Malhotra picked the best actress and actor trophies for their first films Gangs of Wasseypur and Student of the Year, respectively.
The supporting actor of the year - female category saw Divya Dutta and Rani Mukerji in a tie for their work in Special 26 and Talaash, respectively. Among the males, Nawazuddin Siddiqui was honoured for his performance in Gangs of Wasseypur under the same category.
The melodious chartbuster Tum Hi Ho from Aashiqui 2 was given the popular song of the year title.
The sold-out show featured scintillating acts by Bollywood star Siddharth Malhotra, who performed to songs from his film Student Of The Year, while Ranveer Singh rocked the dance floor with his energetic dance act on a medley of songs.
Priyanka danced on the song Deva Shree Ganesha and Madhuri Dixit rocked the stage with her performance on hit songs, including her latest chartbuster Ghaghra. They were cheered by a 7,000-strong live audience.
As many as 150 film and TV personalities from India and 30 South African film and TV personalities were present here.
Designer duo Alpa and Reena's couture was featured at a special fashion show.
Indian TV actor and host Manish Paul, who is ready to make his film debut with Mickey Virus, and his co-star Elli Avram, shared the promotional trailer of the film, and also hosted a segment of the show.
Other TV personalities Mona Singh, Apurva and Shilpa Agnihotri, Ravi Dubey, Sargun Mehta and more were joined by their contemporaries from the Rainbow nation.
Not to forget, holding the evening together with his inimitable wit was filmmaker Karan Johar, accompanied by the beautiful Dia Mirza, former Miss South Africa Tatum Keshwar and the charming Simba.
On the Indian television front, popular soap Pavitra Rishta of Zee TV picked up the show of the year award, Gurmeet Choudhary was adjudged lead actor of the year, while Kratika Sengar of Punar Vivaah fame won the lead actress award.
The Indian-origin community in South Africa numbers around 1.5 million. About 80 percent of the Indian community lives in the province of KwaZulu Natal, about 15 percent in the Gauteng (previously Transvaal) area and the remaining 5 percent in Cape Town.
Those from South African film and TV industry were also honoured at the gala.
7De Laan won the TV show of the year, and the TV actors of the year award went to Robert Whitehead for Isidingo and Baby Cele for Zabalaza.
SAIFTA was organised by Mumbai-based event management company Celebrity Locker in collaboration with the Kwa Zulu-Natal Department of Economic Development and Tourism of Durban. It's focus was to enhance the exchange of cultural elements of the Indian and South African entertainment industry.